A few days before a new school year started, officials at Beaverton School District in Oregon found their entire data center offline. With no recent inclement weather or any other apparent reason for the disaster, leaders were puzzled and unable to reboot half of their hard drives — including one with all of the payroll data.

In addition to school starting, the district had just over two weeks to pay its staff of 5,000.

“We had a very limited time in order to get records to payroll so all of our employees would be paid,” Sue Robertson, the district's chief human resources officer, says in an EdTech video. “The [IT] teams that were involved in this spent very little time in the ‘Oh no’ stage.”

While the IT staff was able to recover the payroll data, Beaverton School District officials realized they needed a disaster recovery plan.

Here are three things they learned as they created that plan:

1. Get Help with Continuity Planning

To create the plan, district officials took a closer look at what they had in place to protect their data, but they still weren’t sure exactly what they needed to do.

In order to craft a continuity of operations plan, the district partnered with CDW•G, which brought in solution architects to look at running the school from a business perspective.

“We have a business to run. We have assets to protect, and we have requirements we must meet, so we built a plan around that,” says Langford in the article.

2. Create a Backup for All Departments

The district didn’t just create one continuity plan to protect its most valuable data.

Jordan Beveridge, the district’s administrator for technology services, says in the video that officials came up with 20 plans to encompass every department in the district, from nutrition services to human resources.

“For us to really holistically protect the organization, we need to not just look at how will IT respond in the future, but how does the whole organization continue to operate in the event of a catastrophe?” says Langford in the video.

3. Rely on Digital and Physical Backups

While having technology in place to backup data is important, the biggest asset in the district’s recovery plan is actually a big, red binder.

The binders — which include a flash drive containing a virtual copy — are given to district leaders and include all of the disaster recovery plans for every aspect of the district. 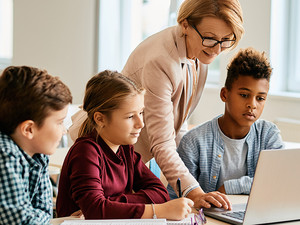