When the New Media Consortium (NMC) first announced this year’s projection on the future of K–12 technologies, it opened the presentation with a quote from science-fiction author William Gibson: “The future is already here — it’s just not very evenly distributed.”

The truth in this quote is evident in this year’s research, where tomorrow’s technologies are being used in schools across the world — but they have not been widely accepted yet.

The long-awaited NMC Horizon Report: 2015 K–12 Edition was released Monday, during ISTE 2015. The 58-page report is intended to help guide educational-technology decision-makers through the complex and evolving trends shaping the industry.

To stay on the pulse of these trends, NMC’s researchers cast a wide net, polling the interests of 56 experts, including educators, futurists, journalists, information technologists and IT leaders. They also branched out into what other countries are doing with technologies.

Some of the leading-edge work begin done with wearable technologies is happening in Switzerland and Japan, according to the report.

"Indeed, wearable technology has been pushing the boundaries of what students are able to create — even spurring wearable-themed school events and contests."

One of the omissions from this year's list of trends was gamification. NMC CEO Larry Johnson said earlier this month that gamification is unlikely to hit mainstream status, because the concepts are "too hard to integrate and there are no tools to make it easier."

However, aspects of gamification live on through digital badges, one of the rising stars of educational-technology trends.

"Digital badges have been a boon for efforts to validate the acquisition of soft skills such as problem-solving, persistence, communication, and other attributes that are valued by employers," according to the report.

Also included in the report was a detailed breakdown of six key technology trends happening in education and their expected timeline in the classroom. Johnson said the threshold for "impact" is when the concepts are being used in approximately 30 percent of schools.

The full report can be downloaded for free from NMC's website. 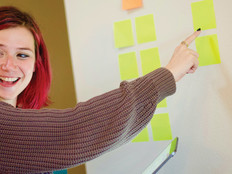