“The true power of blended learning is the differentiated instruction that goes on within the classroom," says Milpitas Unified School District's Chin Song.

Sometimes, it pays to start over. That's certainly been the case for California's Milpitas Unified School District.

Wanting to modernize education across all 13 K–12 schools, Cary Matsuoka and Chin Song — the Silicon Valley district's recently hired superintendent and chief technology officer, respectively — asked staff at each school the following question in March 2012: If you could design a school of the future, what would it look like?

As staff from each school brainstormed, certain strategic and tactical initiatives emerged: reduce the reliance on traditional lectures and personalize learning for each student; allow students to learn anytime, anywhere — not just when they're in school; and take advantage of mobile devices and online instructional content to help them do it.

Months later, a blended-learning ­approach was born, combining classroom instruction with online learning and everything on the staff's wish list. Two elementary schools piloted the new teaching model during the 2012–2013 school year. Although it isn't mandatory, all MUSD schools have now implemented some form of blended learning.

"We wanted to transition from traditional education to a flexible, 21st century model, and we were determined to support our schools in any way we could," Song says. So far, the district has invested in new networking equipment, Wi-Fi and about 5,000 Acer, HP and Samsung Chromebooks.

Innovative districts such as MUSD are recognizing that they can no longer take a business-as-usual approach to instruction. Today's students — and, increasingly, teachers — are tech-savvy, and they want an interactive and engaging classroom experience. To adapt, these districts are investing in more technology and embracing new instructional models.

IT leaders from these districts say it's important to get technology into the hands of every child and to extend the classroom beyond the school day, so they're focusing their limited budgets on mobile devices, cloud applications and other online educational content. They're also building out their wireless infrastructures to support all of these new efforts.

"Technology for instruction, if done well, allows students to reach out to a much broader world," says Peter W. Cookson Jr., principal researcher for Education Sector, a think tank at the American Institutes for Research. "Students today are comfortable with turning on a computer for learning. It's not novel or unusual for them. The challenge is to use the technology creatively to meet learning goals."

For the pilot, each school built a learning lab to accommodate more than 100 Chromebooks. Students rotate through the lab twice a day for their math and English-language instruction. "Students take a formative assessment online, and depending on how they perform, the software generates a learning path for them," explains Alicia Padilla, Randall's assistant principal. "They get customized digital instruction."

With online coursework, students who work at a faster pace can get ahead, while students who are behind can catch up, Song says.

"Teachers use the real-time reports to modify instruction on a one-to-one or small-group basis," Song says. "That's the true power of blended learning — the differentiated instruction that goes on within the classroom."

It was a mad scramble to launch the ­pilots in time for the start of school in fall 2012. That spring, principals and teachers at the two schools quickly designed a new teaching process. Over the summer, the IT department rushed to upgrade the district's network infrastructure to support the pilots and other tech integration efforts in the district, including a one-to-one Chromebook pilot at Milpitas High School.

The IT staff improved bandwidth by increasing Internet speeds from 100 megabits per second to 1 gigabit per second at each school and by bolstering its network with new Cisco Nexus 7000 Series and Meraki switches. They also installed 620 Meraki wireless access points throughout the district, with one 802.11n AP in each classroom.

Weller and Randall staff made adjustments along the way, but their pilots were successful, prompting other schools to implement blended learning for the 2013–2014 school year. There's no one-size-fits-all approach, Song explains, so schools are implementing it differently. Some are experimenting with blended learning at a single grade level, while others have adopted it throughout their schools. Some are rotating their students within the classroom, and others are trying one-to-one computing. District leaders encouraged teachers to innovate through defined autonomy.

"We're continually testing different learning models. This allows our schools to optimize the model that works best for their environment," says Song, who plans to add 3,000 Chromebooks during the next school year and reach a one-to-one ratio by fall 2015.

The technology has invigorated teachers, confirms Damon James, ­principal at Thomas Russell Middle School. What's more, students are more engaged in class, as evidenced by the dramatic decrease in suspensions and disciplinary actions.

The move toward blended learning also has changed students' perception of computing devices. "Before, they saw them as something for word processing or web surfing at home," James says. "Now, they see them as learning tools."

Transitioning to tech-enabled learning has been a multiyear process for Colorado's Boulder Valley School District too.

CIO Andrew Moore's long-term vision is to equip each of the district's 30,000 students with a computing device. As he works to secure funding, he's laid the foundation by investing in IT infrastructure, technology pilots and professional development. Moore hired Director of Educational Technology Kelly Sain, and three years ago, they migrated the district to Google Apps for Education. In the ensuing years, they've deployed other cloud apps, including a social network where students can ­communicate and hold class discussions.

Last year, BVSD launched a professional development program, called 21st Century Cohort, through which the district trains teachers and teacher librarians to integrate technology into their classrooms and provides them with equipment. Last summer, the IT department outfitted the district's 22 middle and high schools with Wi-Fi; it will deploy wireless to all 34 elementary schools this summer. 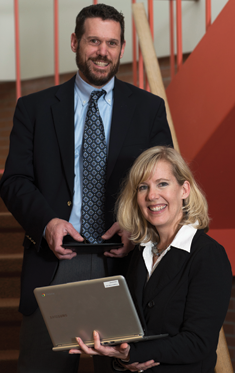 Andrew Moore and Kelly Sain are leading Boulder Valley School District's efforts to build an infrastructure that can support one-to-one. "We want every student to have the opportunity to excel and thrive," Moore says. "This is where it starts."

Eventually, Moore envisions tablets for K–2 students and Chromebooks or notebooks for students in grades three through 12. Today, the district averages seven to 10 computing devices per class.

"When students have their own devices, they have no barriers. They have no excuse that they can't get the ­information they need," Moore says. "We also know that learning doesn't stop when the school day stops. They can go home and continue to work on research papers and their presentations — and that's the direction we are headed."

The district also is piloting e-books in several schools this spring and has ­received funding to begin a one-to-one pilot at Centaurus High School in the next school year. Some BVSD elementary schools have classrooms with tablets for math and science classes.

Some teachers are even flipping their classrooms — another form of blended learning. "The goal is to take learning to a different level that expands beyond the four walls of the classroom," Sain says. "When students work on a project where the audience expands to classmates, parents or another classroom in another country, they put in more effort."

Other districts, such as Hilliard City Schools in Ohio, have been early adopters of online learning. Ten years ago, teachers at Hilliard started creating online courses using the Moodle learning management system for students to earn missing or needed credits. But the technology was so popular that online educational resources became part of the curriculum throughout the 22-school district.

Most teachers have turned their classes into blended-learning courses using Moodle, Google Apps or their own websites. Teachers post assignments and instructional materials online, while students collaborate on projects and turn in assignments electronically, says Director of Technology Rich Boettner.

In all, the district offers 53 fully online high school classes and 1,000 blended learning courses. "Kids talk about how much they enjoy collaborating," Boettner says. "Everyone is at their own house, and they can work on a ­presentation together all at once."

The district isn't focused exclusively on online applications. Most classrooms have a projector, and many have inter­active whiteboards and document ­cameras. Students also have access to tools for video production and podcasts.

The district currently provides mobile computing carts to classrooms, but in the future, Boettner wants to equip every student with a tablet. The district plans to begin beefing up its wireless network this summer and start a one-to-one pilot during the 2014–2015 school year.

"Right now, we are still limited in the amount of time that teachers can have technology in the classrooms," he adds. "One-to-one will allow them to use technology every day to support the work we're doing instructionally."