“Tablets are the newest, coolest thing,” says Tracy Lewis, who has brought the Motorola Xoom and other tablets into classrooms in Oregon’s Gervais School District No. 1.

Whether it's for portability, special features or just the "wow" factor, school districts around the country are finding that tablets are the right choice to fulfill their instructional needs — and they're not just choosing the iPad.

Gervais School District No. 1 is one example. Director of Technology Tracy Lewis has brought a variety of tablets into the northwestern Oregon district's middle, high and alternative schools since 2011, but her first (and largest) deployment gave students — primarily those with special needs and others enrolled in alternative programs — access to 84 Motorola Xoom tablets.

Lewis chose the Xoom over competing models because the device's Android operating system is easy to use and because of its comparatively low cost. "You don't have to have a mother ship" — an expensive, ­dedicated machine — to manage an Android tablet, she says. "We're trying to reach kids on their level, and ­tablets are the newest, coolest thing." Students are so excited about having access to the devices in class that they've even sent her thank-you notes, she adds.

Teachers, meanwhile, enjoy the tablets' flexibility and portability. When they want to integrate the Xoom into instruction, they simply reserve one of the mobile carts on which the devices are stored.

62% of parents would give their children a mobile device if it were used in schools for academic purposes.

SOURCE: Learning in the 21st Century (Blackboard and Project Tomorrow, 2012)

According to Lewis, the process of testing tablets in classrooms included giving teachers a say in which models would be deployed, what applications would be loaded on them and how the devices would be used to facilitate the learning process.

A standard district practice involves "soliciting teachers to be pioneers" who test new technologies ahead of their peers and then serve as advocates for those tools before, during and after ­implementation. In this case, the pioneer teachers detailed for their peers how much students love ­working with the tablets and shared what they learned from integrating the tablets into instruction.

This type of early involvement helps foster teacher buy-in — an essential component of any technology deployment, says Rod Russeau, director of technology and information services for Community High School District 99 (CSD 99) in Downers Grove, Ill. Russeau's professional development strategy for the two-school district included training teachers to use the Lenovo ThinkPad X220 tablets that CSD 99 is leasing for ­classroom use. The tablet rollout was part of a larger network upgrade project that brought wireless capabilities to both schools.

At the outset, Russeau scheduled site visits at nearby schools that were already using tablets and took a cohort of teachers with him on those visits. He then requested sample tablets from different manufacturers, "put them in teachers' hands and let them play with them," he says.

The teachers' feedback was essential in helping Russeau and his team choose the right tablet for the ­district. "It lends credibility to our process when teachers see that we asked their peers to participate," Russeau says. Once teachers saw the tablets in action, the functionality really opened up a new world of teaching and learning opportunities to them, he adds.

Giving students a feeling of ownership is a critical component of the program. Students are allowed to personalize the tablets with their own backgrounds and apps, which motivates them to take better care of the devices, Grimes explains. Parents also take an active role in teaching responsible use, as they are required to either cover the devices under their own homeowner's or renter's insurance, certify that they will pay to replace the tablet if it is lost or stolen, or purchase insurance from the school.

Getting Started with Tablets

First, decide where and how the tablets will fit into the curriculum. CSD 99's Russeau suggests looking at desired uses and educational outcomes across grade levels and involving a team of teachers and technology integration specialists in the process to ensure that the needs of all stakeholders are taken into account. 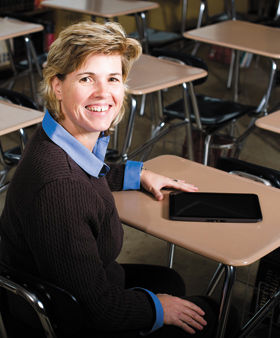 “We're trying to reach kids on their level, and ­tablets are the newest, coolest thing,” says Tracy Lewis, Director of Technology for the Gervais School District No.1 in Oregon.

According to Ferdi Serim, a longtime educational technology advocate and consultant and the current executive director of the New Mexico Society for Technology in Education (NMSTE), tablet integration has been uneven in districts across the country. But he sees the greatest benefit when students are given control of the tablets and, as a result, their own learning. "I've seen kids learn in four weeks what their teachers said took them a year to achieve," he says.

Second, consider which device will best serve the district's needs. "A tablet is a consumer device, primarily," Grimes says, so it's particularly well suited for student activities that involve knowledge gathering, resource consumption and sharing. Many of the Metropolitan School District of Wayne Township's educational tools are delivered through its learning management system, he adds, giving students ready access to learning resources wherever they have Wi-Fi.

Cost is a major factor to consider. Grimes has rolled out 600 tablets to students so far and is exploring increasing that number to 1,800 by the end of March. He adds that implementation on that scale wouldn't have been possible if his district had chosen a notebook ­computer, an ultrabook or a tablet with a premium price tag. A difference of a few hundred dollars per device can translate into a much larger rollout, he explains.

Lewis says cost was a key consideration for her ­district as well. Gervais School District No. 1 is using a variety of devices (mostly Android-based) to determine which one offers the best fit, she explains, and will likely explore some of the new Windows devices as well, once their prices come down a bit.

For some districts, standardization is the best choice. Edgewood City Schools of Trenton, Ohio, for example, chose Acer Iconia tablets. "We're a Google Apps ­district," says Technology Coordinator Chris Andrews, "so everything had to be Google-compatible."

Third, evaluate the infrastructure. For Russeau, this was a natural next step because CSD 99's tablet rollout was part of a larger, planned infrastructure upgrade that included the addition of wireless connectivity.

In Wayne Township, on the other hand, the need for more infrastructure became apparent once teachers began using the tablets in earnest. Grimes says the ­district quickly solved its connectivity issues by adding wireless access points to classrooms and common areas.

Finally, choose a purchasing procedure. Many ­districts choose to buy their devices outright, but Russeau decided that leasing made the most sense for CSD 99. Although leasing adds interest charges, it's an acceptable price to pay to spread the cost over a three-year period.

The biggest benefit of leasing, Russeau says, is the replacement cycle it guarantees. "The arrangement, both financially and procedurally, publicly locks us into replacing the machines" at the end of the lease, he explains.

NMSTE's Serim says that teachers, administrators and staff often view the process of change that tablets can bring about as disruptive. But he believes it's a ­necessary evolution that districts must make to better prepare students for the future.

"The way we've been doing things can't take us where we want to go," he argues. Tablets can help by allowing educators at all levels to focus on the learning, not just the teaching — and that, he adds, "is truly ­revolutionary."

Here are the basic specifications for a few tablets that have hit the market in recent months. 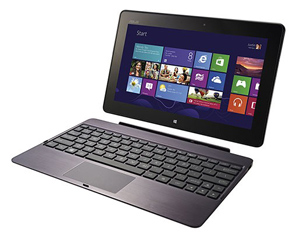 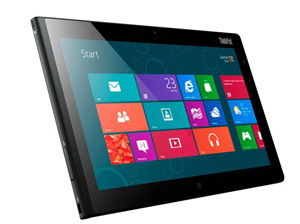 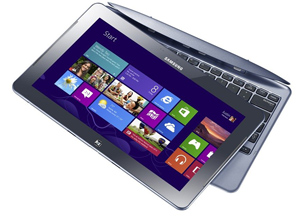