In the aftermath of a tornado, Wadena–Deer Creek Public Schools had to rebuild its just-deployed wireless infrastructure. Aaron Johnson says the district eventually wants to extend the WLAN to all of its facilities.

Countless K–12 schools have deployed or are deploying wireless local area network (WLAN) technology to enhance the educa­tional experience, to facilitate collaboration between teachers and students, and to over­come the limitations of a wired infrastructure.

Countless K–12 schools have deployed or are deploying wireless local area network (WLAN) technology to enhance the educa­tional experience, to facilitate collaboration between teachers and students, and to over­come the limitations of a wired infrastructure.

Officials at Wadena–Deer Creek Public Schools District No. 2155 in Wadena, Minn., certainly had all of these objectives in mind when they upgraded to a WLAN infrastructure last June. Little did they know just how critical the district's move to wireless would become: Within hours of completing the installation, a tornado ripped through Wadena, destroying the high school, throwing district facilities into chaos and pushing students and staff into temporary buildings (fortunately, no one was injured).

Given the circumstances, the district suddenly had a more pressing near-term need: ensuring connectivity for teachers who had become more mobile, and not by choice. "Teachers weren't in permanent rooms, so there were no desktop computers available," says Aaron Johnson, technology coordinator for Wadena–Deer Creek, a two-school district with 1,000 students and 75 teachers. "If they wanted to work after hours, they no longer had a room where they could do so."

600 million bits per second
The maximum possible data transmission rate for wireless equipment, based on the 802.11n standard

Wadena–Deer Creek is among the nearly 90 percent of schools and districts that have wireless technology in place today, says Thomas Greaves, chairman of the Greaves Group, an educational technology consulting firm. About 25 percent of them provide wireless access in every classroom, and 10 to 15 percent have wireless networks robust enough to support connectivity if every student had a notebook computer. Greaves says schools are transitioning to wireless primarily to accommodate the wide range of mobile devices educators and students now use to connect and communicate.

Wadena–Deer Creek officials originally intended to begin with a limited wireless deployment, providing connectivity only in areas where wired infrastructure wasn't adequate. In spring 2010, they ordered and made plans to install four wireless access points (APs) and a mobility controller from Aruba Networks, choosing the products because of their robust security and management capabilities. But once the network was deployed and then destroyed by the tornado, those plans changed. Suddenly, wireless would offer a primary means of communication.

Over the summer, Wadena–Deer Creek's IT staff worked with Aruba to have a total of eight wireless access points up and running in four district buildings in time for the 2010–2011 school year.

Johnson couldn't be happier with the simplicity of Aruba's wireless controller, which centrally manages access and administration of security policies. "I can purchase an Aruba access point, run a cable [to the AP], plug it in and it's basically done," he explains. "It communicates with the controller, which finds it, adds it to the network and sets all the security rules."

The 2,800-student Lynden (Wash.) School District also selected Aruba because of its robust configurability and security, says Jeff Leischner, district tech­nology coordinator. "You can set up as many AP groups as you want and put certain wireless profiles into each one, and that will dictate what it's able to do," he explains. "You can take it out to a location, plug it in, and it will tunnel all the way back to the master controller with minimal setup."

Wadena–Deer Creek's current network infrastructure provides access to grade books and attendance systems, as well as Internet connectivity. The district is using the advanced Wi-Fi Protected Access 2 (WPA2) protocol developed by the Wi-Fi Alliance to secure wireless computer networks, along with advanced encryption standard (AES) cryptography to secure communications. Wireless access rights are defined by the user's identity and existing network access privileges. Staff members can wirelessly access all systems they have permission for in a wired mode; students, by comparison, have access to fewer district systems and can log in to a guest network for Internet access only from their personal devices.

The district's long-term plan – once its facilities issues are resolved and everyone is stationed in a permanent building – is to make wireless 100 percent accessible in all of its facilities. "There are all kinds of devices we want to connect," Johnson says. "That includes the devices we provide, [as well as] students' own laptops, iPods, iPhones. We feel we need to provide that connectivity."

The educational and accessibility benefits of a wireless infrastructure also are noteworthy. For the Alden Central School District, which serves nearly 1,900 students at four schools in Alden, N.Y., a Meru Networks wireless LAN makes teaching and learning more interactive. "When you see teachers excited about wireless and [you have] the ability for kids to work on projects collaboratively and to post their work on websites, the level of engagement increases and they get more interested in their own education," says Frank Rizzo, Alden Central's director of instructional and information technology and chief information officer.

What's more, wireless makes connectivity possible where it may not have been otherwise. "We have one building that was built in 1916," Rizzo explains. "Trying to retrofit [that and other old buildings] with wired connectivity can be daunting." So the district worked with an engineering firm to blanket its campuses with a wireless network that works in all of its facilities, regardless of their age or building materials used. 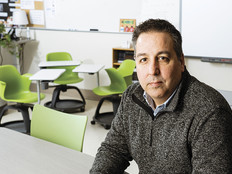 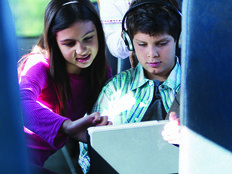