Melinda Richwine says Hillsborough County Public Schools students' enthusiasm about using student response systems is palpable. "When we have students asking if they can take a test today, we know we've got them," she says.

"One of the teachers had her students send me thank-you notes," says Richwine, district resource teacher for elementary technology. "It made my day to see their drawings and read what they thought of the devices."

What they wrote in their notes validated Richwine's decision to invest in the handheld devices. "They told me they liked saving paper and going green," she ­explains. "They also said they didn't feel bad anymore when they had to answer questions in class."

Hillsborough County's students aren't alone: Educators who have introduced student response systems into their classrooms say students are more engaged with daily lessons as a result, retaining more information and participating in class discussions far more frequently. They also say that lesson planning is more efficient because student feedback is instant. Thanks to the devices, teachers no longer have to wait for unit tests to know who's mastered the topics at hand and who might need extra help.

The category of technologies that track student understanding of classroom material has many names, chief among them student response systems, learning (or learner) response systems, classroom response systems and "clickers." There are many systems on the market, but the concept is the same. Students press the device's buttons to select answers to questions their teacher has posted to an interactive whiteboard or other device using BrainPOP (an online source of animated, curriculum-based content), Microsoft PowerPoint or educational software. Students also can click in to say they don't understand a concept or they need more help. Teachers, meanwhile, have their own devices that track answers and who supplied them.

"It's like a game show," Richwine says. "That's the mentality of a lot of kids. They think they're playing. There's no anxiety, and they're excited about using them. When we have students asking if they can take a test today, we know we've got them."

John Collins, technology coordinator/webmaster for West Bridgewater Middle–Senior High School in West Bridgewater, Mass., purchased four sets of MimioVote assessment systems in 2010, pairing the handsets with the wireless tablets and interactive whiteboards that teachers already were using in their classrooms. By December, students in grades 7 through 12 were using MimioVote.

According to Collins, students' class participation and confidence are up significantly, and teachers are getting a much better handle on which students need help with specific concepts. "It engages kids," he explains, and eliminates "the shyness of having to raise your hand or being afraid you'll give the wrong answer."

Sharon Fowler, the school's library/media specialist, agrees, noting that there are always students who aren't comfortable talking in class. But with MimioVote, "they can voice their opinions without voicing them to everyone in the room," she says. "They think it's the greatest thing they've ever seen. They love waiting for a question and seeing the lights light up, and they take it very seriously."

"Even the reluctant students are fully engaged," adds Quizdom user Heather Mars, a fourth-grade teacher at Watson Technology Center for Math & Science in Garland, Texas. "They have to be engaged because I can see who hasn't responded yet, and I can randomly call on students to tell me why they chose their answers."

Other educators are quick to point out the transformative effect that such systems have on the classroom experience. Amanda Tucker, a third-grade teacher at Johns Creek Elementary in Suwanee, Ga., calls the ActivExpression devices she's been using since 2009 "life changing."

Tucker says her students keep the devices at their desks "for a good portion of the day" and use them every day for math and other lessons. "I turn on BrainPOP and they take a quiz at the end of the lesson using ActivExpression. Before, I would have to have each student come up to the interactive whiteboard to click on the answer," which consumed valuable class time and made students who are shy especially uncomfortable.

"Now, they're all able to respond at the same time using their own handheld devices," she continues, "and I get a good overview of how well they've absorbed that day's material."

These teachers' experiences aren't unusual, says Bill Penuel, director of evaluation research for SRI International's Center for Technology in Learning. "Students in classrooms where teachers use clickers effectively report higher engagement and participation in class, and they also learn more," he says.

Penuel also believes the devices help teachers do their jobs more effectively because "data from the clickers is immediate," he says. "It's typically from a question a teacher has posed that's related to an immediate learning goal."

Debbie Llanes, a third-grade teacher at Rose L. MacDonald School in West Bridgewater, Mass., says the immediate feedback she gets from MimioVote is invaluable. "It lets me see right away who's not getting something," she says of the tool, which she uses in all of the subjects she teaches. "If a large percentage of kids [are having trouble], I can go back and reteach that concept or problem right away."

What's more, she adds, students appreciate that they can contribute to class discussions "on their terms." Because it's digital, "it's something they relate to."

Teachers like it, too, because it's so simple to learn. "It takes two seconds," Llanes continues. "The hardest part is setting up a class," which can be accomplished either by "typing in each student's name or by importing [the information] from Excel or another document."

Although student response systems are a fantastic innovation, Penuel cautions that they aren't a classroom cure-all.

"There are many ways to use clickers so they're less effective," Penuel says. "Using the systems to ask only 'what' questions, rather than 'how' and 'why' questions that probe students' reasoning, is one way to undercut their effectiveness. Another is to just cycle through questions without engaging students in a discussion of their responses." Unfortunately, he adds, "there's nothing about the technology that prevents these uses."

Budgets, too, can be a challenge. "We're limited by the economy, especially in Florida, where we rely on tourism dollars," Hillsborough County's Richwine says. "Our budgets are not what they used to be. But we get creative. I may buy three sets of 32 devices, but then I buy more hubs and break the sets apart to get them into more classrooms. We combine devices from one set at this site and one at ­another site to get more complete sets."

Richwine has used them not only with students, but also with parents during school nights and with teachers during training sessions. Everyone loved the devices, she says, but she was surprised by one unintended consequence: "It brings out a lot of competitiveness in adults!" she laughs. "They want to keep playing, and they want to win. It gets very spirited!"

A survey conducted by researchers from SRI International; the University of California, Los Angeles; the University of California, Davis; and Santa Clara University in California's Silicon Valley found that schools are investing in handheld student response systems for a variety of reasons, including to gain instant feedback from students, to gain a better understanding of what students do and don't understand, and to promote student learning. Also of note: 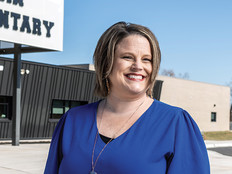