The regional education board in upstate New York uses distance education to teach a Mandarin Chinese class to 150 students, says Ken Ford, director of information and technology at the Oneida BOCES.

Technology not only helps teach foreign languages, but also allows students a world apart to teach each other.

These ideograms, written in Mandarin Chinese above, mean “good morning.” While few adults in this country could actually translate the characters, it’s a different story when it comes to K-12 students.

Many public and private schools across the nation are teaching Mandarin Chinese and other critical languages to students as early as first grade. Through Web cams, computers, Web sites, software, whiteboards and videoconferencing, the plan is to turn students into global citizens by equipping them with the most basic skill that people need to live, work and learn: language.

In another example, the Oneida-Herkimer-Madison (N.Y.) Board of Coop­erative Educational Serv­ices (BOCES) uses distance learning to teach Mandarin Chinese to local school district students. The schools use the technology to teach 11 full-year language classes, including Spanish, Mandarin Chinese and American Sign Language, says Ken Ford, director of information and technology at the Oneida BOCES in upstate N.Y.

Mandarin is one of the four official languages in Singapore; approximately 870 million people speak Mandarin.

On a recent visit to China, Independent Day’s headmaster, Joyce Burick Swarzman, met a Chinese professor, Sang Xinmin, who shared her vision of preparing students for a global society. The pair coordinated a program in which four Chinese students from Nanjing University in Nanjing, China, would perform their school internships at Independent Day for four months.

The college interns began to teach students and teachers their native language.

Even after the interns returned to China, the lessons continued. Considering the 12-hour time difference between the two countries, scheduling was a bit tricky. Between March and May 2007, all students and teachers were invited to participate in five 40-minute sessions that were held at 5 p.m. About 20 students and two teachers attended.

Each session was held in a classroom equipped with a computer, Web cam and whiteboard. Jason Contino, director of instructional technology at Independence School, says he also downloaded Skype (www.skype.com), free software that can be used to make video calls over the Internet to others on Skype.

Contino explains that the images of the interns were projected from the computer screen to the whiteboard so all students could clearly see them. He says it worked so well that the school recently purchased Web cams for half of its middle school classrooms and a quarter of its elementary grades to connect with students in China, Spain and other parts of the world.

The interns also sent PowerPoint and Microsoft Word files containing new words or phrases for students to learn, adds Betty Norlin, an International Connections resource teacher at the school. She says students would write them on the whiteboard, then take turns speaking them so the interns could correct their pronunciation, a key component of learning any language.

Also key to learning a language is understanding the culture. During one session, Norlin says, an intern pointed her camera out the window so that it could relay live images of fireworks celebrating the Chinese New Year.

Although the school is not offering further opportunities for students to learn Mandarin Chinese this year, it still offers a Spanish foreign language program, which incorporates Latin in its sixth-grade Spanish classes to teach students how to recognize the roots of words. “Technology helps our students converse with the rest of the world,” Contino says. “They won’t be isolated Americans.”

Schools nationwide are using technology to teach languages. But technology should enhance learning, not interfere with it.

In 2006, the Oneida, N.Y., BOCES received a three-year grant for $675,000 from the U.S. Department of Education to teach Mandarin Chinese starting in grade six. Initially, the organization anticipated interest from about 40 students. But the demand will soar to 150 next year, requiring BOCES to hire a second Mandarin Chinese teacher, says Ford.

Teachers are connected to students through a high-definition IP videoconferencing system from Polycom that enables two-way video and audio communication, says Ford. Instructors use a tablet computer and a document camera to deliver instructional content. Streaming video and live premium channels, such as Discovery or The Learning Channel, are also incorporated into lessons.

He says students of all ages are growing more comfortable learning this way. Some may sit quietly for the first several minutes of class because they’re not accustomed to interacting with a monitor. But once they start conversing with the teacher and other students, it becomes a natural way for them to learn.

This year, BOCES plans to offer an evening program for Mandarin Chinese students and their parents. They’ll communicate with their counterparts in China, learning from each other about their culture and lifestyles.

“The kids are excited and the districts are happy with what’s been happening,” says Ford. “Smaller districts that couldn’t afford to teach Mandarin now have the opportunity. Our hope is that this technology becomes commonplace.”

Languages of the Future

For decades, K–12 schools typically taught Spanish, French and German. But as China positions itself to become the world’s next financial superpower, educators are introducing Mandarin Chinese into the classroom.

“The hot language is definitely Mandarin Chinese,” says Marty Abbott, director of education at the American Council on the Teaching of Foreign Languages in Alexandria, Va. “K–12 schools are jumping on the bandwagon. There’s also a push from the Chinese government to send their teachers here.”

Besides Mandarin, Arabic ranks high on the federal government’s list of critical languages. Other languages on the list include Persian, or Farsi, which is primarily spoken in Iran and Afghanistan, and Urdu, the main language in Pakistan and India.

But Arabic is less popular in the classroom. Many people say the language has limited applications, Abbott says, explaining that government officials involved with national security issues or establishing diplomatic relations with the Middle East are most likely to use this language.

Despite the soaring interest in Mandarin, Spanish still draws the most attention and student enrollment. With approximately 43 million Hispanics living in the United States, Abbott says people understand the language’s practical nature.

“You can make a case for learning any language, even Latin,” says Abbott. “We’re starting to see a real interest in language learning. Parents are making sure their children are getting all the skills they need to live and work in the 21st century.” 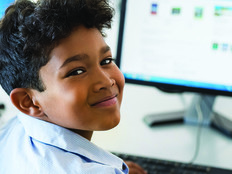