Every higher education institution faces challenges in the quest to build a strong, reliable IT infrastructure that meets performance expectations. As demand for faster networks, new applications and data storage grows, the risk of failure and threats to security also increase.

Clarke University, a private Catholic college in Dubuque, Iowa, has built resiliency and redundancy into its IT services.

The IT department is constantly fine-tuning and upgrading its IT infrastructure to deliver the performance that its campus community requires, says Clarke University CTO Andy Bellings. In recent years, for example, the IT staff upgraded to a faster Dell EMC storage system to boost virtual machine (VM) performance. To strengthen IT resiliency, higher education institutions must use a combination of strategies, focusing on IT security and scaling resources as needed, whether it’s on-premises or in the cloud, says IDC analyst Ashish Nadkarni.

Universities and colleges must also build in redundancy, deploy network and systems monitoring tools, and run drills in which they simulate failure scenarios to test their disaster recovery plans, he says.

Over the past decade, Clarke University has migrated most major applications to Software as a Service (SaaS) environments, including Microsoft 365, its learning management system, and course scheduling and fundraising software.

The university, which has about 900 students, also uses Azure Active Directory for identity and access management, but its remaining workloads, including its mission-critical student information database, are housed in an on-premises data center, Bellings says.

As part of its tech refresh cycle, the IT team recently upgraded its storage to speed application performance and bolstered its data backup and recovery strategy.

The upgrade resolved existing latency issues and improved the performance of file storage, the security camera system and applications that access the student database, including student billing and payment, meal plan and dorm room information, says Kyle Begle, the university’s network administrator. In fact, all the active data is stored on SSDs, providing faster speeds, he says.

The new SAN also improved the data backup process because it allowed the IT staff to redeploy the old SAN at a secondary site. Now, the university uses Veeam data backup and recovery software to back up VMs and data to the old SAN in a secondary data center and to the Wasabi cloud, Begle says.

The backup copy in the cloud is immutable, meaning it’s tamper-proof and cannot be changed, deleted or encrypted, which can help the university quickly recover from a cyberattack and prevent data loss and downtime. 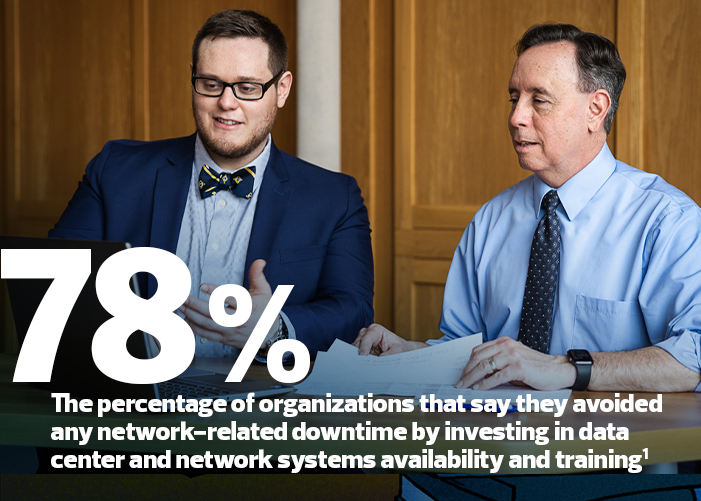 At Piedmont Community College in Roxboro, N.C., newly hired CIO James Tagliareni has focused on modernizing and securing the campus IT infrastructure to improve technology services and make sure the institution doesn’t get hit by ransomware again.

In August 2020, before his arrival, the college suffered a ransomware attack. In the aftermath, Tagliareni’s predecessor migrated important applications and data to the cloud, including the campus enterprise resource planning system and email.

When Tagliareni joined PCC last summer, he inherited an IT situation that needed an overhaul. After assessing the infrastructure and consulting with campus users on IT needs, he quickly developed a tech plan to improve performance, resiliency and security.

After hearing complaints of a slow network, he increased bandwidth tenfold by upgrading the campus fiber connections from 1 gigabit per second to 10Gbps. He purchased new uninterruptible power supplies for network switches and upgraded to a new Palo Alto Networks next-generation firewall, which provides security features the campus didn’t have before, including intrusion detection and prevention systems.

To improve uptime, Tagliareni deployed tools to proactively monitor the health of the network and IT systems, including servers and the phone system. If security vulnerabilities or outages are detected, the tools will alert the IT staff.

“We will know in advance if something is wrong, so we can fix it,” Tagliareni says. “We don’t want ransomware to happen ever again.”

PCC’s current servers are not powerful enough, and its current storage hardware does not have enough capacity for users’ needs. So, this summer, Tagliareni will upgrade to two new HPE ProLiant DL380 servers and a 100TB Nimble Storage SAN in the school’s primary and secondary data centers.

PCC will deploy VMware virtual desktops to provide students and staff the apps they need. If the main data center goes down, it will automatically fail over to the second.

“We want to make sure resilience is built into our systems and that we are providing reliable services to our users and can adapt to their growing and ever-changing needs,” he says.

We want to make sure resilience is built into our systems and that we are providing reliable services to our users.”

California State University East Bay has migrated nearly all its applications and data to VMware Cloud on AWS and to SaaS providers.

CIO Jake Hornsby made the move partly because he needed to upgrade data center equipment at the time and wanted to move from a CAPEX model to an OPEX model. He also wanted his staff to focus on innovation and improving customer experiences rather than maintaining IT infrastructure.

In late 2018, the university transitioned to VMware Cloud on AWS over an eight-month period. In doing so, the IT department could better support remote learning, improve business continuity and save money. When the pandemic began, the university was fully prepared because all the major apps were accessible in the cloud.

“Pre-pandemic, we had moved 90 percent to the cloud. That stack allowed us to transition to remote learning and remote work with no effort,” Hornsby says.

The cloud migration, supervised by Thomas Dixon, the university’s director of infrastructure and information security officer, has enabled the IT department to pursue digital transformation projects and improve customer service.

DISCOVER: How and why to establish a cloud center of excellence.

As for resiliency and uptime, cloud services do suffer occasional outages. Some of CSU East Bay’s SaaS-based applications have occasionally over the past year, but VMWare Cloud on AWS has had zero downtime because of built-in redundancy.

A brief outage is acceptable because not everything goes down at once in a way that would completely stop teaching, learning and operations, which is a big distinction between on-premises and cloud-first operations, Hornsby says.

“It’s better than enough for what our customers expect,” he says. “The tradeoffs of our cloud efforts allowing us to focus on customer experience is totally worth it in the end.”

Why it's important to create redundancies

What did Clarke University do when its main ISP began to suffer occasional outages that can last 24 to 48 hours? Subscribe to a second one as backup, of course.

This way, if its main internet provider goes down, the other will keep services running. The university used the Border Gateway Protocol to tie the two ISPs together. The IT staff configured it on its Palo Alto Networks firewall’s virtual router.

The backup connection was especially important early on during the pandemic, when classes were taught remotely, says Bellings. Many students continued living in the dorms while taking remote classes, while some teachers taught virtually onsite. If the main ISP went down, no one noticed thanks to the second ISP.

“Having a solid internet connection was critical,” he says.