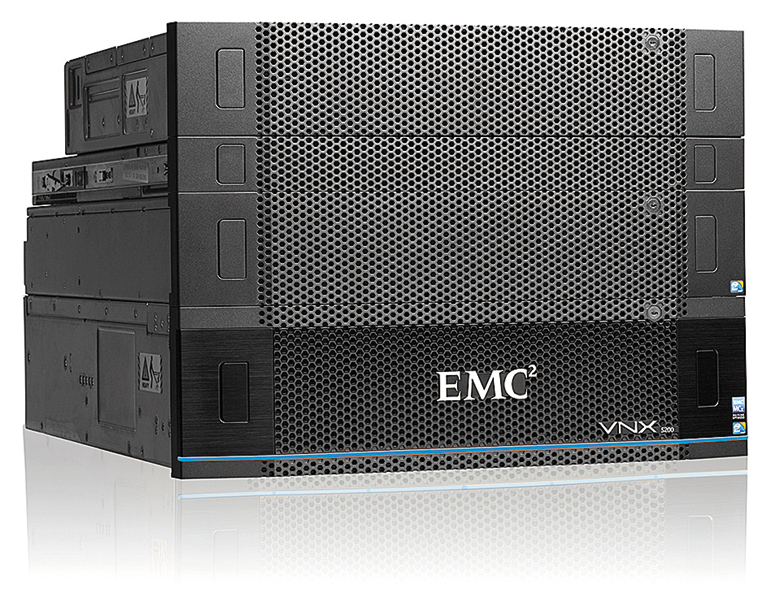 It's difficult to believe that the EMC VNX 5200 is the entry-level unit of the new VNX network-attached storage product lineup for EMC.

This incredibly powerful machine takes up just three units of space and can hold up to 125 drives. Users can customize the configuration and type of drives inside the array, with a variety of both flash and traditional spinning drives supported. As such, the VNX 5200 is designed to work in almost any storage environment — from simply saving files in the data center to service as the backbone of a large virtual desktop initiative rollout. This unit also integrates with VMware and Microsoft Hyper-V virtualization.

For this review, we tested a unit set up in a hybrid configuration with several flash-based solid-state drives used for data processing. About 70 percent of the remaining drives were traditional spinning disks, which were used only for storage. This setup resulted in an extremely fast environment, and was simple to configure and manage; however, that is just one possible configuration.

Regardless of the role, all VNX 5200 users will enjoy certain advantages and protections. The most unique are built-in battery backup units. Two BBUs are installed per array in the base module, providing enough power to ensure that any data in flight is de-staged to a vault area in the event of a power failure. In the unit we tested, the VNX operating ­environment booted from the first four drives on the enclosure, which also functioned as the vault area. When the power was cut in the middle of a write operation, the unit continued to function long enough so that no data was ever lost. A backup power supply is still recommended, of course, but the BBUs can compensate for any delay in switching over to a new power source. 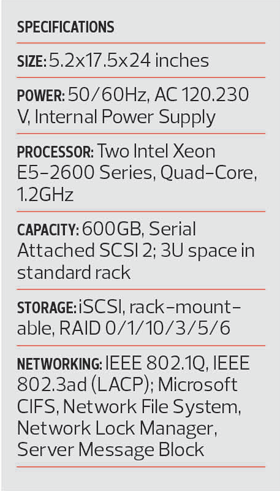 Another great feature is the auto­mation provided by the MCx operating environment and the Unisphere user interface. Administrators can set policies and configure storage with just a few clicks, or leave it to the system to manage tasks automatically. The 5200 can do just about everything on its own, such as assigning unused drives as hot spares for RAID configurations, throttling write arrival rates to avoid flushing, and continuously self-tuning based on current configuration and workload.

The VNX 5200 is a powerful blank slate for storage. For the entry-level enterprise environment, it can become almost anything an organization needs. It can be tightly managed by a storage administrator who really wants to tweak it, or left almost completely alone for those who aren't experts in storage and simply desire a device that works out of the box, and it will maintain optimized settings from that point on.

Get IOPS with flash hybrid configurations

The EMC VNX 5200 can be configured to just about any storage use case; however, the fact that it can support both flash-based and traditional spinning disks in the same array, both governed by the same operating system, means that organizations can deploy the NAS in a hybrid configuration to save money and gain performance.

Some situations, such as virtual desktop deployments, rely heavily on disk input/output operations per second (IOPS) to work properly. Traditional spinning drives are great for situations in which few read and write calls and a lot of storage space is required, but VDI demands just the opposite type of setup.

A drive's IOPS is equal to the number of times it can access information per second before a user query is delayed waiting for those in front of it to clear. Even the fastest traditional drives on the market — spinning at 15,000 rotations per minute — are still much slower flash drives, with no moving parts. The fastest traditional drives can provide between 180 and 200 IOPS each. Slower drives, such as those that spin at 7,500 rpm, only deliver between 90 and 140 IOPS each. And at peak times with VDI, that's simply not enough to get most jobs done. Compared with a typical flash drive, which can offer between 3,000 to 3,500 IOPS, traditional disks simply can't keep up.

That is where the ability to deploy and manage a hybrid configuration within the VNX 5200 comes into play. For example, the first four drives in the array — where the operating system, the emergency vault protection zone and the front line storage save processes take place — should probably be flash drives, which give users up to 14,000 IOPS right off the bat. Other flash drives, or fast-spinning traditional drives, can be added for storage capacity. Additional IOPS, with the bulk of the unit fleshed out with cheap, slow, traditional drives used only for storage (and which don't need to contribute), can be added to the total IOPS capacity.

The beauty of the VNX 5200 is that the operating system and the drive enclosure aren't affected by the configuration. The setup can comprise all flash, all traditional drives or a cost-efficient hybrid. Very few NAS devices allow such flexibility as well as ease of use, making the VNX able to take on almost any storage role, or even multiple roles, within an organization.