Keeping networks free of threats in higher education is a difficult task. With potentially hundreds of faculty members and thousands of students online, separating good and bad traffic while identifying both legitimate users and potential threats is extremely challenging. With the pandemic forcing many students and staff into remote learning environments, the problem has only gotten worse, and threat actors have been quick to respond with increased attacks.

Two of the biggest problems for cybersecurity teams in higher education are a lack of resources and an inability to coordinate defenses. The IBM Security QRadar Security Information and Event Management (SIEM) solution was designed to help with both of those problems.

MORE ON EDTECH: Establish a long-term security plan for remote staff and faculty in higher ed.

While the SIEM solution itself is powerful, it also comes with an entire system of assets that enhances its visibility and usefulness. This includes event collectors, event processors, flow collectors, flow processors and data nodes in addition to the central console.

In addition to its own network of components for monitoring and analyzing traffic and data, QRadar comes ready to automatically connect with more than 450 other security appliances.

In most cases, you can simply point the logs of those devices to the SIEM solution and it will automatically detect and integrate that feed into its activities. This way, universities can coordinate all their defenses in one place and keep watch over the entire enterprise with a much smaller staff than would normally be required. Once in place, QRadar begins to access a prebuilt set of thousands of security use cases, anomaly detection algorithms, real-time correlation policies and rules to detect both known and unknown threats.

As potential threats are discovered, the SIEM solution will correlate all network activity to determine if the discovered activity is a lone attack or part of a coordinated campaign. You can even import threat feeds using the standard STIX/TAXII format to add even more context to incidents, and IBM includes its own X-Force threat feeds as well.

In addition to collecting insight about logs, traffic flows, anomalies and potential threats across on-premises, Software as a Service, multicloud and hybrid environments, QRadar also presents this information in an easy-to-understand graphical format.

While higher-level technicians will probably want to dig into the raw data, the graphical interface makes it easy for even the most junior technicians to quickly understand the biggest threats to the network and what actions need to be taken to restore security. Thereafter, QRadar helps with post-attack activities to plug vulnerabilities and prevent recurrences.

Click the banner to learn about Westminster College's new approach to cloud security. A SIEM Solution That Plays Well with Others

In cybersecurity, most companies pitch their products as the best and lobby their customers to remove everything else from their networks. IBM takes a different approach with QRadar and makes it easy to connect with almost any other kind of security device in order to coordinate defenses. Given that many college network defenses have grown up organically over time, this approach works well to protect campus networks.

To test this out, a QRadar instance was installed on a test network with a variety of other security appliances. Once configured, malware was introduced via a variety of paths, including one advanced persistent threat to test QRadar’s ability to coordinate defenses.

Setup of QRadar was surprisingly easy. Many of the security tools from other companies were automatically detected by QRadar and easily integrated into the appliance’s main interface. For those that were not detected, simply pointing the log files at QRadar was enough to trigger their inclusion.

For custom tools or log files generated by unique devices, QRadar provides an editor that makes onboarding those tools a quick process. 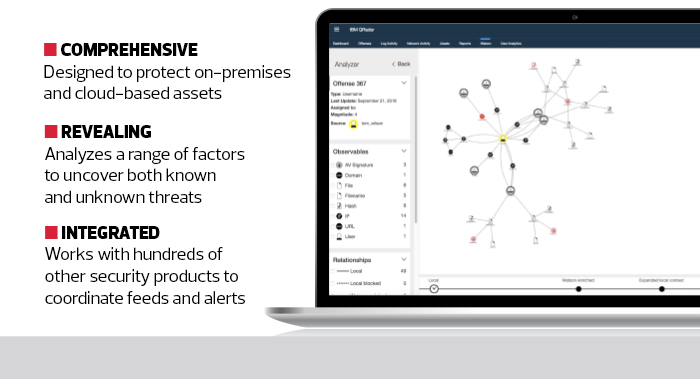 Once configured, we began to introduce malware to the test network using a variety of methods, from cloud-based incursions to direct introductions using endpoint hardware.

In all cases, the QRadar SIEM solution was able to detect those events and put them all in one place for analysis. It was even able to determine that several attacks were related, even though they were entering the test network from different avenues and were detected using different tools.

Despite the hodgepodge nature of the defenses, QRadar presented the situation in one place and helped to coordinate a unified defense. It also provided context for the attacks, correctly deducing that it was part of an ongoing campaign and showing how to prevent them from breaching defenses in the future.

As such, QRadar would be an invaluable tool and a real force multiplier for overworked IT staff trying to protect higher education networks. Its ease of use and simplicity of operations helps QRadar earn extra credit for its impressive performance.