Pressure makes diamonds. This adage implies that people put under pressure can often come out shining — and winning in the end through hard work and perseverance.

But two economists have uncovered a link between the amount of prize money in a golf tournament and the likelihood that a player will “choke” when putting on the final hole.

The economists, University of Idaho assistant professor Daniel Hickman and, University of Central Oklahoma assistant professor Neil Metz, won the PGA Tour’s ShotLink Intelligence prize. The competition for the prize is fueled with data from the tour’s ShotLink Intelligence system, which is powered by CDW. The two organizations have since 2012 been partners in the event, which is open to academics who submit research papers that use ShotLink data.

As the authors of the winning research paper, Metz and Hickman had the privilege of presenting their findings at the 2015 MIT Sloan Sports Analytics Conference in Boston in front of an audience of stats-hungry sports enthusiasts. 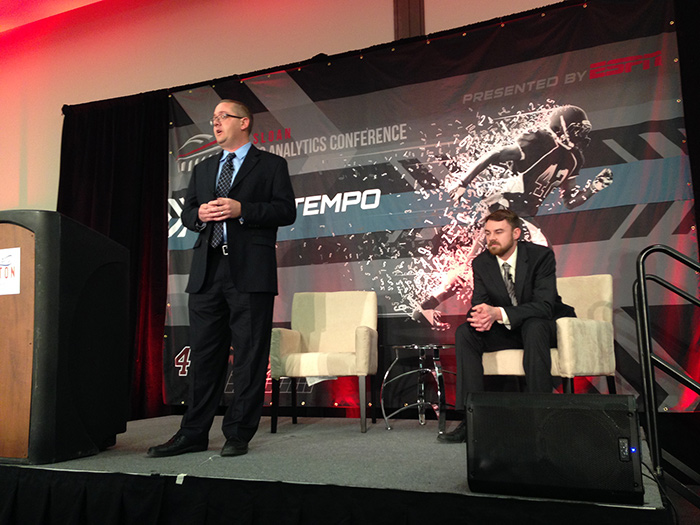 While it’s long been understood that “choking” in golf comes at a steep cost, their findings could break new ground in quantifying what it means at the mathematical level.

“This paper fills an important gap in the literature by directly connecting pressure and monetary reward to performance,” the two write in the paper. “The ability to link a specific monetary value to an individual’s performance allows one to more clearly identify the relationship.”

To establish the relationship between money and performance, the duo combined and analyzed ShotLink data on 23,596 putts and tournament earnings data from 2004 to 2012. This gave them “a unique dataset of putting on the last hole of a tournament which contains information on the shot, the player taking it and the tournament in which it is taken.”

And what did their analyses reveal? Metz and Hickman found that, yes, more prize money does seem to increase the likelihood of a golfer choking while putting on the final hole.

“Overall, the results indicating a significant negative influence of pressure on performance are robust to a number of different modeling choices. While the exact magnitude of the effect varies, there does indeed appear to be evidence of choking on the PGA Tour,” they write.

So, how tight is the link between pressure and money? Metz and Hickman say the magic number is $50,000.

“Our primary model indicates that increasing the value of a putt by around $50,000 will decrease the likelihood of a player making the putt by 1 percentage point,” the two write.

“For the putts from under 5 feet, we do see a negative effect. If you go from the 5- to 10-foot range, you basically get double that,” Hickman said in presenting the findings at the conference.

The good news is that the likelihood of choking on the final hole seems to go down for more experienced golfers. In other words, if you’re used to winning and raking in the big bucks, the daunting thought of blowing it all on the last hole is further from your mind.

This means that the best antidote to choking on the last hole is winning big prizes repeatedly, which boosts your confidence. Go figure.