As an undergraduate biology major at the University of Utah, with minors in computer science and chemistry, Vincent Fu could often be found in the lab or with his nose in a book. Still, Fu recalls, a strong academic background wasn’t the only factor that ultimately prepared him for his first job after college. It was also his interest in digital media and design — and his experience as a student using Adobe Creative Cloud.

After he graduated in 2017, Fu explains, a medical device firm hired him as a front-end app developer, but he soon transitioned to the marketing team. In both positions, he used Creative Cloud to build digital assets to enhance and promote the customer experience. “Medical concepts can be challenging to explain,” says Fu.

But if you happen to be fluent in digital visual media — and understand how to leverage a solution like Creative Cloud — that can “make a world of difference in communicating complicated content and research data in a visually consistent way,” he says.

Fu, now a medical student at the University of Colorado, is far from alone in his assessment of a skill set that some describe as “creative digital literacy.” Today, employers in almost every field expect the college graduates they hire to have experience in digital media creation. Many demand proficiency in the tools of the trade, including those offered in the Creative Cloud suite.

“It used to be that these kinds of skills were only for students in the graphic arts — a very small sliver of the population,” says Todd Taylor, the Norman and Dorothy Eliason Distinguished Professor of English and Comparative Literature at the University of North Carolina at Chapel Hill. “But now we see digital media transforming every industry, and that’s led a lot of universities to take another look at their curricula.” UNC Chapel Hill is an Adobe Creative Campus, recognized by the company for making Creative Cloud available to all students.

No matter what students’ eventual professions might be, Taylor says, “they can’t afford to not understand how these digital makerspace tools work.”

In his opinion, Adobe Creative Cloud has three key features that set it apart from other digital media tools and make it an ideal fit for higher education. First, he says, it’s a “creativity-productivity platform” intended to help users in all disciplines solve problems, develop critical thinking skills and share knowledge with peers.

“In terms of creative digital literacy, it moves students away from being passive, disconnected consumers of content to becoming active, connected producers of ideas,” he says.

Second, because Creative Cloud is cloud-based, it’s “an app-store experience” that works on any device, with services and tools for users of all levels, from total novices to design experts.

“If you’re in engineering and you’ve never heard of Adobe, that doesn’t matter,” says Taylor. Wherever you are on the learning curve, there’s an application for everyone.”

Finally, Creative Cloud is considered the industry standard. Before students at UNC Chapel Hill had access to the platform, he recalls, “you could hack together a piece of free software here, another little piece of free software there, but it was always just a partial solution” that didn’t help anyone’s employment prospects.

Today, on the other hand, with Creative Cloud across campus, students studying subjects from physics to religion are using its tools to prototype mobile apps, create graphics and illustrations, and produce, edit, and share videos that reflect the concepts they’re learning in the classroom. And because employers are familiar with the platform and use it themselves, that experience has value when students add it to their resumes.

When Taylor hears about recent graduates like Vincent Fu who’ve used Creative Cloud to help launch their careers, he can’t help but smile. “I come from a generation where this stuff was magic,” he says. “For these students, it’s what they do every day.” 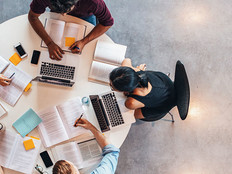