With an average of 135,000 unique devices on its network, The Ohio State University processes up to 12 million wireless authentications on a busy day.

That volume makes it essential that administrators focus their efforts on problems affecting the greatest number of users. But until recently, engineers largely relied on activity logs and user incident reports to identify pain points.

“We had a lot of good tools that showed granular data, but we didn’t really have a high-level view showing performance trends or behaviors,” says Ryan Holland, manager of network access. “We were able to get fine details, but we were so deep in the weeds that we couldn’t see the whole field.”

The tool also helps IT leaders plan for substantial network changes that will have an even larger impact, Holland says.

“Before, we were often putting out fires as they came up, and we were at the mercy of user feedback,” says Holland. “Having a tool like this allows us to pause and ask whether we can use our time a little bit better and work smarter — to fix problems that don’t affect just one or two access points, but instead tens or hundreds.”

Betsy Reinitz, director of the enterprise IT program at EDUCAUSE, says advanced analytics are the logical next step from more basic network monitoring tools that colleges and universities have been using for years.

“With the Internet of Things and the increase in mobile, there are enormous amounts of data coming in all the time,” she says. “Schools have to be able to optimize networks, and these analytics tools are going to become more and more important.”

For administrators, analytics tools can dramatically reduce the time needed to diagnose and mitigate networking issues. At Santa Barbara City College in California, network specialist Brandon Lovelace uses VMware vRealize Network Insight and VMware vRealize Operations to gain visibility into the performance of virtual machines on campus. Although the college has been a VMware customer for decades, Lovelace’s department adopted the analytics tools fairly recently.

“Before, we would have to dig into the historical graphs and hope there was enough data there to give us a good answer,” says Lovelace. “These tools make it a lot faster to solve the issues that do come up. It used to take me an hour or so to figure out what a particular host might need. Now I can just go into the tools and see the trends.”

At the University of Oklahoma, IT staff obtained Dell high-performance computing equipment that the university had previously used for research and deployed the open-source security program Elasticsearch. The tool allows security staffers to quickly search for indicators of compromise related to certain usernames or windows of time.

“The data set we end up with is much more actionable than before,” says Ron Fellhauer, the university’s executive director of information security and IT risk management. “It cuts down time, and it cuts down on the complexity needed to troubleshoot certain things. It has allowed us to expand our security operations center to include student workers who don’t necessarily have any security background or skill set, but — using this data — they can be productive.” 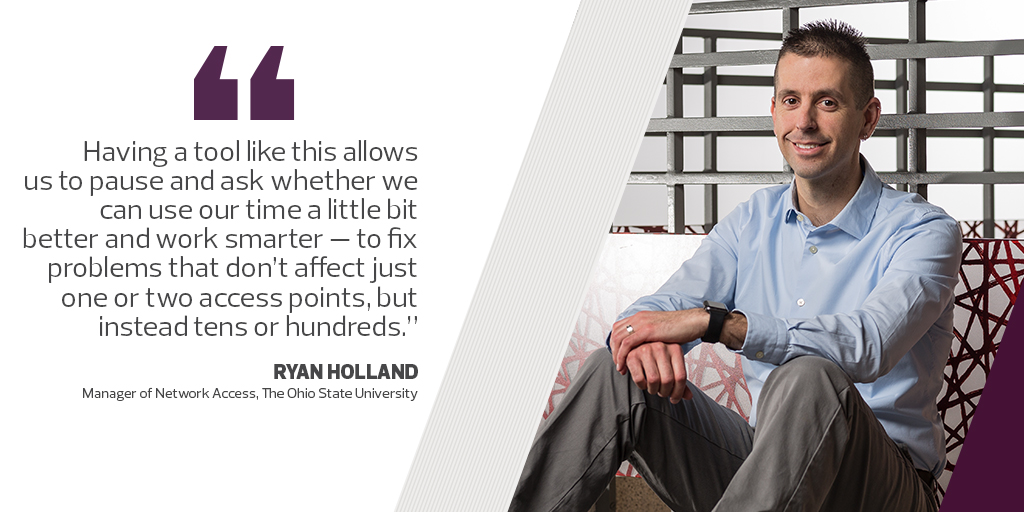 Analysis from Elasticsearch has allowed the University of Oklahoma to uncover trends in security lapses and adjust policies accordingly. For example, data analy­sis revealed that compromised credentials accounted for a significant portion of the university’s cybersecurity issues. As a result, IT changed its policy to now require users to alter their passwords at least once per year.

The university also relies on a mix of monitoring and analytics solutions from providers, including HPE and Cisco, to generate heat maps that help administrators learn about and prioritize networking issues.

“Before, a lot of it was word of mouth,” says Jonathan Fozard, the University of Oklahoma’s assistant vice president for IT. “Sometimes we would find out that things were down because students would tweet about it. Now, we’re making data-driven decisions. We can go out and replace an access point before students even realize there’s a problem.”

At Ohio State, NetInsight has helped reveal several solvable issues. For example, IT staff discovered that a configuration error was preventing hundreds of students from accessing the web through eduroam, a global wireless network access federation for research and education — an issue that never came to light through user incident reports.

Also, in certain campus locations designed for high-density wireless connectivity, AP misconfigurations were artificially capping the number of users who could connect. Network administrators also discovered that a common device issue was preventing some Apple TVs from connecting to the network.

“We were able to reach out to the administrators of the devices, and that relieved pressure on the infrastructure,” says Holland. “Those were authentication failures that we had to process, and now we don’t.”

Analytics-driven insights have led Ohio State to steer more clients to the 5-gigahertz band to relieve congestion in residence halls, and to reconfigure indoor APs to decrease the number of outdoor devices connecting while passing by. Over time, Holland says, he hopes to use network data to inform decisions about non-IT use cases, as well. For example, mobile device data could help optimize space utilization and energy usage.

“The whole Big Data conversation is relatively fresh,” Holland says. “In terms of network optimization, we’re at the earlier stages. I definitely think we’ll be leveraging these tools more and more.”

By the McKinsey Global Institute’s reckoning, data analytics is “the next frontier for innovation.” But its emerging importance hasn’t translated to the workforce. According to MIT’s Sloan Management Review, 40 percent of organizations say they have trouble finding and retaining employees with analytical skills.

The Ohio State University is doing its part to close the gap with its data analytics major for undergraduates. The major was unveiled several years ago, and Ohio State produced its first class of data analytics graduates in the spring of 2017. Alumni have gone on to analytics jobs with General Motors, PwC and other organizations.

This spring, the program will move to a newly renovated, 21,000-square-foot space that includes labs for hardware, software and data visualization.