Jana Duda oversees the 3D printing “FabLab” at the Fashion Institute of Technology.

New York City’s Fashion Institute of Technology (FIT) has a long history as a hotbed of creativity, but even seasoned staff like Jana Duda, the technology resources manager at FIT’s Gladys Marcus Library, have been impressed by students’ innovative work in the fledgling 3D printing lab.

The FabLab, as the space is known, was originally created for the institute’s toy design program, which planned to incorporate 3D printing into its curriculum. But since the lab opened a few years ago with two 3D printers and a laser-equipped cutting tool, numerous other departments have found uses for it too.

“We keep adding new printers as we identify student needs,” Duda says. “Now we’re at the point where we could use more room.” At the moment, the lab houses two sections. The first is a full-service production area, where trained staff run print jobs that students submit as digital files. A separate self-service area includes two easy-to-use MakerBot Replicator 2 Fifth Generation 3D printers, a 3D scanner, a Wacom Cintiq drawing tablet and desktop computers. One student recently used the self-service area to print a 3D pattern into a mesh-fabric garment.

“She got the hot printer filament to bind directly onto the fabric so she wouldn’t have to sew the embellishments in,” Duda says. “I’ve seen students make a lot of interesting things, but that project was really cool.”

3D Printers Teach Skills that Are in Demand

Although 3D printing labs like the one at FIT were little more than a novelty just a few years ago, today they’re becoming a fixture at colleges and universities around the country. One reason, of course, is that 3D printers have become much more affordable, making it easier for institutions to add them to their budgets. But it’s also because administrators have read the tea leaves, says Pete Basiliere, an additive manufacturing analyst with Gartner.

He points out that as more enterprises use 3D printing to make their products, additional opportunities are created in the workforce. Companies in manufacturing, aerospace, healthcare and other industries need graduates who understand the technology and are experts in 3D design. “Educators have recognized this,” Basiliere says. “They’re trying to prepare their students.”

Indeed, a recent IDC report predicts that sales of 3D printers in the education market alone will climb from $200 million in 2016 to $500 million in 2019. Technical colleges and universities with robust science and engineering departments are expected to drive much of that growth, but a newfound appetite for 3D printing in all kinds of academic programs will also contribute to the boom.

3D Printing Has Applications From Art to Science

At Mount St. Mary’s University in Maryland, students in the visual and performing arts department can now take a class in 3D design to learn how to design and fabricate 3D art objects.

“For now, we do all the printing in my office,” says Nick Hutchings, an assistant professor of visual arts and the course’s instructor. “But we’re building a new digital-fabrication lab, so we should have more space in a matter of months.”

Hutchings used a donation to buy the department’s first 3D printer, a MakerBot Replicator 2, and then leveraged a grant to purchase three others. The new lab, he says, will include those four printers and possibly one more, as well as two computer-controlled routers, a laser cutter and 15 HP Sprout computers that can scan 3D images. 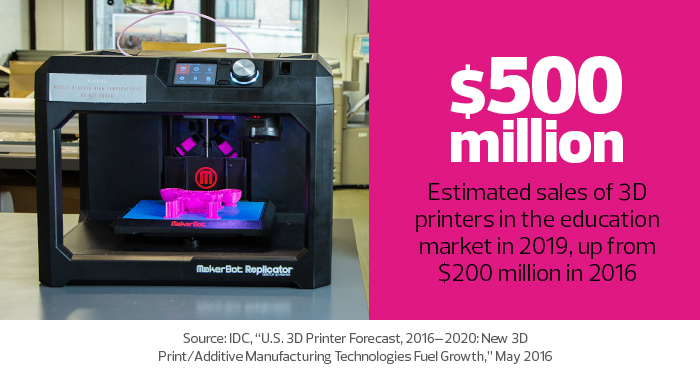 “My long-term vision is to have a space that is fully accessible to students across all of our departments,” Hutchings says. He also hopes to partner with the university’s new Palmieri Center for Entrepreneurship to turn the lab into a full-fledged makerspace. “I’d love to have it open 24 hours a day and let anyone come in and use it to build their ideas.”

Until then, Hutchings says, the existing space is working just fine, with the students finding creative ways to take advantage of the tools. His design students recently began a “lifecasting” project in which they are designing and fabricating artistic models of human body parts. Chemistry students have used the machines to print models of molecules. And one student from a biology class is using the printers to build special molds that will eventually hold collagen to support growing cells.

Start Small with Makerspaces, Then Grow

As more educators introduce 3D printing to their students, they can share best practices with others who want to follow in their footsteps.

“What I’ve learned in piecing this space together is that it’s OK to start small and just get in there and play,” Hutchings says. “Do your research, figure out what’s best for your students and for your program, and go from there.”

FIT’s Duda agrees: “It pays to spend time at the beginning speaking with as many faculty and students and departments as you can to determine exactly what the need for 3D printing is on campus.”

In FIT’s case, Duda says, the staff opted to start small, carving the new space out of an existing classroom. They knew the lab would see regular use, but they weren’t certain how quickly demand would grow. Their cautious optimism has been validated by the strong interest from students.

“Especially as the semester progresses and there are more assignments due, and then as students have finals and are working on their portfolios, sometimes it gets really busy in here,” Duda says. But those crowds are good to see. “It’s a great resource — and we’re prepared for the work.”

A Partnership that Pays

A common concern for institutions with 3D printing labs is the cost of filaments and other materials. Some colleges address that by charging students materials fees, but Westmoreland County Community College in Pennsylvania has come up with a creative alternative: partnering with a local electronics company that needs occasional prototyping.

Frank Kordalski, dean of WCCC’s School of Technology, says the company sends its digital files to WCCC, where students pick them up and take care of the printing jobs. In return, the company buys 3D printing materials for WCCC when its supplies run low. Those materials cover the company’s own projects and those of students.

“All I have to do is pick up the phone,” Kordalski says. “It works out great for them, and it pays off for us.”