The first year on the job is the toughest, says Pattie Orr of Baylor University.

Find your way in your next position by following the five action items a new CIO should know.

When Pattie Orr relocated to Waco, Texas to lead IT for Baylor University, part of the job’s appeal was that her daughter and son-in-law work there. But Orr didn’t get to spend as much time with her family as she would have liked that first year, because of all the work that goes into getting up to speed as a new CIO.

“The first year is tough. It separates the women from the girls,” says Orr, vice president for IT and dean of university libraries for Baylor. After Orr reached her first anniversary last summer, the job became more manageable, she says.

Along with the specialized technical issues, hierarchical, political and budget concerns can be daunting challenges for new CIOs. What follows are five tips from higher education IT vets:

“The job starts the minute you accept it,” says Anne Scrivener Agee, vice provost for IT at the University of Massachusetts coming from another school or job.”

In higher education, it’s typical for people to be hired in the spring and come onboard in the summer. Because the search process tends to be long, the IT unit may have been without a leader in place for some time. Administrators may not wait for you to arrive on campus before asking for your input, she says.

Do your homework and spend time learning as much as you can about the institution. But avoid acting on that knowledge before you get there, if possible. “Don’t let them pressure you into making decisions before you get there and understand the situation,” Agee recommends.

Keep in mind that hiring committees want you to see the best of an organization.

As you settle in, the warts may come to view.

“You probably won’t have as much money as you thought and will probably have more obligations for the IT department than you realized,” explains Dennis Trinkle, executive director of the Indiana Higher Education Telecommunication System in Indianapolis.

Agee worked at five different institutions, and each had a different way of doing the budget. There tend to be many sources of funds, and some have restrictions on how they may be used, such as for projects that directly benefit students.

Trinkle recommends keeping an open mind. Don’t believe with 100 percent confidence anything you hear from anybody, no matter how trusted that person may be. “You will learn that all perspectives have a partial view. Until you’ve been there awhile, you’re not going to really understand it accurately,” he says.

Speaking of understanding, one thing to grasp quickly is what people at the university care about and why, says Alex Cullen, a vice president and research director at Forrester Research. At some schools it may be what IT does for the students that’s most important, and at others, what IT does for the professors or researchers. The goal could be innovative and cutting edge, or stable and low cost. Schools may be looking for someone to serve as a turnaround CIO or simply to keep the trains running on time.

“Spend the first three months meeting the people and giving them updates on what you’ve found about the IT organization, asking what they care about, playing back what you’ve heard, and then asking them to sort of be your partner and ally,” Cullen recommends.

“There’s a delicate balance that you must attempt to strike between change and continuity,” says Robert E. Renaud, vice president and CIO of Dickinson College in Carlisle, Pa. “But if you wait too long to make any big changes, your employers wonder why they hired you.”

The average higher education CIO’s tenure is seven and a half years.

Upon being promoted to Dickinson CIO four years ago, Renaud says his biggest challenge was advancing his agenda in an environment that was just starting to capitalize on technology. His first-year IT projects included replacing an enterprise resource planning system, moving to Microsoft Active Directory and Exchange, and standardizing on BlackBerrys. “Your political antennae have to be up from Day 1 as to how far you can go and how fast,” he says.

While Renaud’s mission was to revolutionize IT at Dickinson, Orr focused on infrastructure improvements at Baylor and tried to avoid making dramatic changes her first year. She deployed a new storage area network, a high-performance cluster, virtualization and security initiatives, such as increasing awareness and requiring encryption for notebooks.

Above all, Renaud advises first-time CIOs to get used to dealing with ambiguity. “No one is going to tell you what to do,” he says. “Develop your own agenda, and rely on your experience and instincts.”

Change doesn’t necessarily come easy to employees, many of whom will seek assurances that their jobs are going to be secure and valued.

“It’s very important not to promise anyone that yes, everything is going to stay the same,” Orr advises. “Now you’ve cut off your opportunities to make changes and remain truthful.”

Trinkle found himself stepping into a new situation where the IT staff had been unsupervised and unaccountable for up to 24 months.

“Whatever your style is, you’ll probably have to get the organization comfortable with being led.”

IT leaders agree that being promoted from within or coming to the job from outside the institution both have advantages and drawbacks. 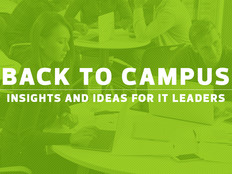