Technology has advanced to the point where many school districts are investing in modular data centers. This is especially true for small and medium-sized districts, but even large ones may have a few smaller facilities.

The hitch? The IT staff often must place small server stacks in rooms, or even closets, that weren’t designed to house technology appliances. Standard HVAC units can’t compensate for the concentrated heat buildup, which can affect performance and eventually cause servers to fail.

Spot coolers such as the Tripp Lite SRCOOL12K portable air conditioning unit can keep small server rooms and wiring closets chilled with little user intervention beyond initial setup, which itself is extremely easy.

The tower is slim enough to squeeze in almost anywhere and wheeled for easy transport. Typically, a single unit can keep a 500-square-foot area cool.

On the back of the unit, a flexible plastic tube vents hot exhaust. A built-in dehumidifier slowly off-gases water vapor with the exhaust, so there is never a need to empty a pan or perform physical maintenance.

Users set the desired temperature and modes through a large, top-side touch panel. After the initial setup, the cooler operates independently. Even if a power failure occurs, the cooler will remember its previous settings and resume operation once power is restored. A small, square vent allows for directed cool airflow.

For testing, I set up the SRCOOL12K in a 450-square-foot room with no cooling source. The ambient room temperature was 76 degrees, but powering up several servers in a rack raised the temperature to 84 within an hour. I set the Tripp Lite to 74 degrees, venting the exhaust tube out a nearby window using the included mounting hardware. 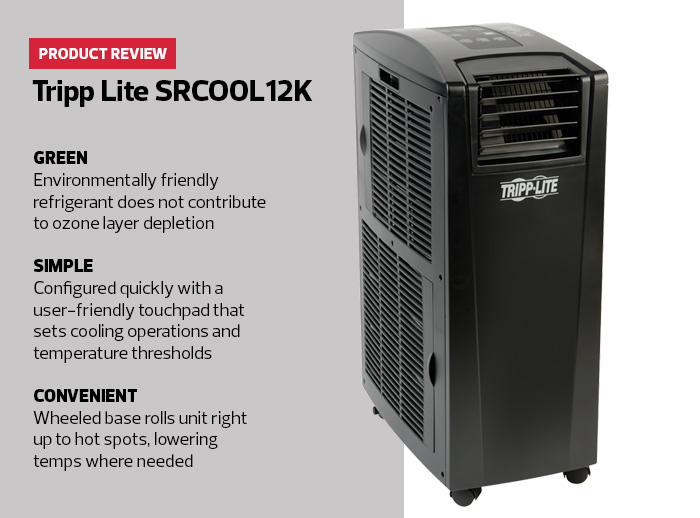 Within 20 minutes, the temperature was down to 74, and the cooler was taking short breaks, running its fan to vent water vapor.

I ran the setup for three days. Except for a 1-foot perimeter around the servers, the room temp never climbed more than 2 degrees above the setting.

Tripp Lite also includes close-coupled cooling hardware. This type of cooling tool can be an indispensable resource for staying a step ahead of debilitating heat and humidity.

Most users will find that the Tripp Lite SRCOOL12K portable cooling unit works just fine right out of the box, as it did for me in my initial testing. However, there is a way to squeeze more efficiency out of the unit.

Each tower comes with a vent that can direct air vertically using shutters, and there are wheels to position the unit horizontally. That works pretty well, but the operation could be better. Fortunately, the cooler comes with a second vent cover and a plastic tube that allows for more precise airflow.

In my 450-square-foot test lab, the ambient temperature was 76 degrees, which jumped to 84 within an hour after I powered up several rack-mounted servers. This time, however, instead of just using the cooler in the same room, I attached the front hose and directed the cooling into the top of the rack, allowing the air to flow directly over the servers and vent out the bottom.

The hot air and humid exhaust from the cooler still vented out the back of the unit and out a window, but the cool air went directly onto, and into, the servers. Manipulating the unit this way made it harder to keep the room temperature precisely at 74 degrees, but that’s not really the point of a spot cooler.

Applying chilled air directly allowed the servers’ processors to run an incredible 22 degrees cooler. It also reduced their fan speeds and thus power consumption, making them generate even less heat. And it’s not as though the room was an oven: It stayed close to 75 degrees, 1 degree lower than its ambient temperature. The important thing was that the servers stayed cool and ran efficiently within their rack enclosures.

It’s cool (pun intended) that Tripp Lite includes the extra hardware to allow for close-coupled, highly efficient refrigeration of IT components. If you have only one rack, that is certainly the way to go. Each subsequent rack would likely require a separate unit, or you can fall back to using the standard room-cooling vent. However, given that the cooler is so affordable, furnishing each rack with its own chiller would go a long way to ensure both efficient computing and component longevity.