This traditional learning space no longer supports what students need from K–12 education.

“People think physical space is an innocent bystander,” says Larry Kearns, a principal of Wheeler Kearns Architects in Chicago. “But physical space will reinforce a teacher’s mission, or frustrate it.”

Kearns designs spaces that accommodate larger groups of students and teams of teachers that allow for a high degree of personalization — quite different from the “egg crate model” most people associate with K–12.

“In the schools that we’ve done that have focused on personalization, both have abandoned that model, because it is impossible to have a single instructor differentiate successfully for a large classroom,” says Kearns.

For example, in one class period, six levels of math might be taught in one room.

“That, of course, is inconceivable if you had a single teacher in a cellular classroom,” he says, noting that the current trend toward mobile furnishing is the bellwether of a larger movement that will remake the way schools are built in the next half-century.

Redesigned Classroom Spaces Are Just as Important to Roll Out

When Beaver Acres Elementary School in Beaverton, Ore., committed to becoming future ready, Ryan Hoxie was hired to coordinate the changes. Initially, a big part of his role was getting devices to students and coaching teachers in the use of technology.

Then, a chance meeting with an Ergotron representative led the school to pilot 40 LearnFit desks. Hoxie and two students put them together in about three hours and dispatched them around the school.

“Part of our commitment to becoming future ready is to help reimagine what our classrooms are going to look like,” says Hoxie, “and these fit perfectly in that.” 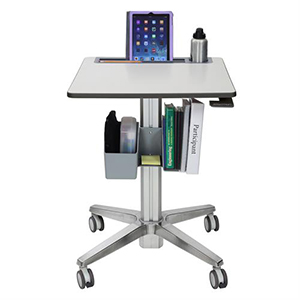 With one or two LearnFit desks available in classrooms around the school, students have the option to stand if it will help them focus or to get a break from sitting too long. But the changes go deeper than just giving students choices.

“The furniture helps lead to decentralized learning, where it’s no longer the teacher at the front lecturing,” Hoxie says. Instead, the teacher becomes a facilitator, moving around a classroom to help individuals and groups.

Hoxie says that the future-ready initiative, now a year old, is already improving student achievement. Teachers note that their students are more focused and are taking control of their own learning. Student writing has measurably improved as well.

“That’s really what it’s all about,” Hoxie says.

The schools that successfully transform their learning environments do so by involving a broader range of stakeholders in the discussion, not just the facilities manager and the business office, but also the students and teachers whose day-to-day lives will be changed.

Mike Patterson, a K–12 education strategist at CDW•G, says just as with a mobile device rollout, he recommends that furniture be piloted in limited classrooms before the final schoolwide strategy is decided upon.

Successful transformations also are holistic. Administrators sometimes expect that changing the furniture, when compared to technology-intensive projects like a one-to-one device deployment, is inherently simple. But, in the absence of larger discussions and deliberate changes to pedagogy, the old model of what a classroom looks like can be imitated with the new furniture, and the hoped-for transformation unrealized.

“Schools in general need to define their learning outcomes, their goals, their visions for their district — the ‘why’ behind everything they’re doing — and not just have it be because everyone else is doing it. It has to be centered around the children,” Patterson says.

When that “why” is well-defined, the fun can begin: The market is exploding with possibilities. Standing and sit-stand desks are only two options; schools are experimenting with everything from bean bag and milk-crate seating to active stools and halls lined with counter-height tables instead of banks of lockers.