Once its existing WAN ­provider wanted to charge significantly more for the same bandwidth speed, Midlothian Independent School District administrators began shopping for a faster, more affordable network — and they got one this ­summer with the help of E-rate funds.

The Texas district contracted with a different service provider to build a $1.49 million dedicated fiber network that connects the district’s 14 sites. E-rate paid for half the construction, the state paid another 10 percent and the district paid the balance.

The result: Midlothian ISD has increased WAN speeds tenfold, from 1 gigabit per second to 10Gbps, and will save $4.5 million in monthly leasing costs over the next 10 years.

“The reason we made the switch was cost,” says CTO Leslie Garakani. School districts across the country are under pressure to get the biggest bang for the buck, and the federal E-rate program is a way to address internet connectivity needs cost-­effectively, while supporting the growing use of mobile computing devices and digital learning in classrooms.

E-rate provides $3.9 billion annually to K–12 school districts to help pay for access to high-speed broadband. Districts can get a 20 to 90 percent ­discount on services and equipment based on their percentage of students from low-income families who participate in the National School Lunch Program.

Today, most districts take advantage of E-rate’s Category One funds, which help pay for broadband from internet service providers, and for WAN services to connect schools so districts can distribute broadband to every school.

In areas with few options, it’s allowed districts like Midlothian ISD to partner with service providers to construct new fiber networks for their educational needs. In some cases, districts build and own the networks themselves.

“E-rate Category One funding is invaluable. We are building networks in places that would otherwise not get built,” says Milan Eaton, state E-rate controller for the Arizona Department of Education.

In the past, E-rate allowed schools to purchase only lit fiber services. But the Federal Communications Commission’s E-rate modernization effort in 2014 gave districts two additional choices: They can lease dark fiber or build a district-owned fiber network if those are the most cost-effective options.

E-rate pays for special construction charges to build lit, dark and ­self-­provisioned networks, and the FCC’s E-rate modernization promotes the effort through additional funds. If state governments agree to pay 10 percent of the construction costs, E-rate will match that with an additional 10 percent.

Hiring an E-rate consultant comes at a cost, but the benefit to the district is great."

The service providers retain ownership of the networks and must maintain them; in exchange, the districts get the speedy WAN connections they need for a low monthly fee. It’s a good trade-off, says Eaton, who calls it a once-in-a-generation opportunity to build fiber networks for remote or rural schools.

“These remote area providers would never have put money on the networks because the return on investment is so bad,” he says. “What we do is pay for the construction and hardware up front, so we can get 10 gigs for pennies on the dollar.”

The fiber ring allows for easy expansion — when a new school opens, the district can connect the school to the closest hub. It also allows dual links to each school for reliability. The ring currently connects the district’s ten other locations, including eight schools, over a 10Gbps connection. 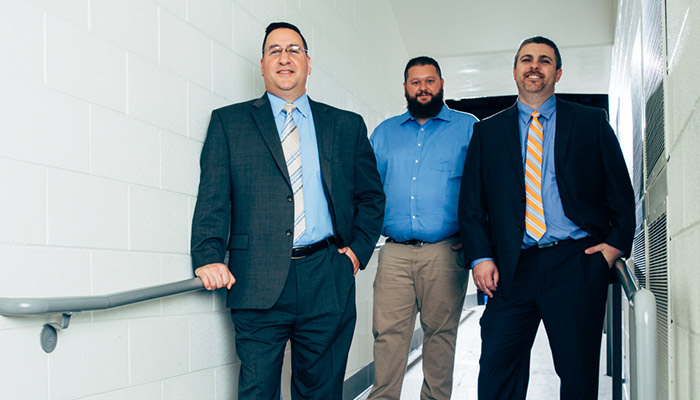 E-rate also has a second funding category that pays for internal connections, such as wireless networking equipment, routers and switches. The district used Category Two funds to purchase Cisco Catalyst 4500-X Series switches to connect the remaining schools and other sites to the network.

The routers cost about $1 million, and the switches cost $320,000. In each case, E-rate reimbursed the district for half the cost of the equipment, Garakani says. The district also subscribes to an ISP for a 1Gbps internet connection, for which E-rate also pays half. As for fiber networking, the increase from 1Gbps to 10Gbps at each school future proofs the district’s bandwidth needs for the next decade and beyond, he says.

MORE FROM EDTECH: Check out EdTech's full coverage of E-rate.

Districts should consider hiring an E-rate consultant, Garakani says. Consultants manage the application process, from meeting deadlines and ensuring compliance to helping formulate responses to questions during the review process.

“Hiring an E-rate consultant comes at a cost, but the benefit to the district is great,” he says.

E-rate initially committed to paying 80 percent of the network’s construction. Because Arizona agreed to pay 10 percent, E-rate matched it with another 10 percent. The district paid for some incidental costs — less than $1,000 — so it was virtually free, says Payson IT Director Victoria Andrews.

The percentage of schools without scalable infrastructure that have upgraded to fiber connections since 2013.

“Our state E-rate representative was superhelpful and proactive,” Andrews says. “He was an advocate for getting the additional 20 percent for us and getting approvals at the state level.”

The rural district subscribes to a 1Gbps internet connection, which is E-rate subsidized. To distribute access to its three school campuses, the district previously relied on microwave radio, but that was slow and would go down in high winds or bad weather, says Payson IT Specialist Daryl Kilbourne.

With the new fiber network, the district has quadrupled bandwidth speeds from 200 megabits per second to 1Gbps, and it’s expandable to 10Gbps when needed, he says.

“The new network is paying dividends in reliability and increased capacity,” Andrews says.

Choose the Right Vendor for the Best Return on Investment

In their request for proposals process, E-rate requires districts to choose the most cost-effective option. Price must be the primary consideration, but the FCC allows applicants to weigh other factors, such as whether the vendor provides local support.

In Wisconsin, the School District of Janesville hired a contractor to build a 26-mile fiber network that the district will own. The district needed a vendor with experience in boring through rock under a river and getting permits from government agencies and private entities, such as railroads.

“It had to be a vendor with the capacity to complete a project of this size and scope,” says district CIO Robert Smiley, who adds that E-rate is paying 80 percent of the $2 million construction project and for another contractor to maintain the network.

But, Smiley cautions, districts have to be adaptable because snags happen. Janesville’s contractor believed it had all the permits it needed to lay the fiber, but discovered at one intersection that it needed another permit from a second railroad. That has delayed the project, but it will be completed by the end of the year.

“It’s not how we planned it, but we are adapting as the project nears completion,” Smiley says.