Scott Baytosh, Head of School at Alexandria Country Day School in Virginia, has been using a standing desk for 10 years.

"Sitting is the new smoking,” declare a thousand news articles. The phrase, credited to James Levine of the Mayo Clinic, refers to numerous studies that have shown the deleterious effects of simply sitting too much: higher incidences of chronic diseases and increased risk of death.

And one place where a lot of sitting is bound to occur? Schools. In fact, as standardized test scores have grown in importance with the wide adoption of Common Core standards, more and more schools have cut back on recess time, resulting in even more sitting for students as they work to acquire the expected skills, according to an online article in Forbes. In one Florida county, the school board had to formally recommend that all its elementary schools offer 20 minutes of recess per day after 23 of its 123 elementary campuses severely restricted or eliminated the break altogether, igniting a firestorm of protest from parents unhappy that their children were being asked to spend entire days indoors working at their desks.

With the sometimes competing demands of student health and academic achievement in need of balance, some administrators have struck upon a novel means of keeping students active while learning. They have brought standing desks, which have exploded in popularity in business settings, into the classroom.

Scott Baytosh has been using a standing desk for nearly a decade. As head of school for Alexandria Country Day School (ACDS), an independent K–8 school in Alexandria, Va., Baytosh was in the midst of planning how to spend a sizeable anonymous donation made to ACDS in mid-2014 when it occurred to him: Why couldn’t the school use this opportunity to create learning spaces that are adaptable to the needs of students and teachers and reflect the research that supports increased opportunities for movement?

Baytosh worked with Ellen Fisher, dean of the New York School of Interior Design and a veteran teacher trained in the Montessori method, on a plan to redesign ACDS classrooms to make them more responsive to the needs of students and teachers. In grades K–4, they selected lightweight desks with ergonomic stools that encourage increased movement and physical engagement while sitting. Though the original design in the middle school called for traditional desks and chairs, Baytosh one day put the idea of standing desks to his redesign team and asked them, why not?

Baytosh and Fisher chose Ergotron LearnFit desks to complement their vision of a reconfigurable classroom.

“What I really liked about the Ergotron version was how flexible it was,” says Baytosh. “A lot of the options out there are fixed-height standing desks. The Ergotron is very lightweight and easy to move, and they can go up and down easily, allowing students to choose whether to sit or stand.”

ACDS began the 2015–2016 school year with the new desks in place for all students in grades 5 through 8.

“There was a lot of excitement, because it was a big change,” says Baytosh. While teachers initially expressed some concern that the desks might prove disruptive, they quickly found that students quickly adjusted to working at the standing desks, while students reported feeling more focused and engaged.

Fisher is the rare interior design expert with experience as a classroom teacher, having taught for several years at The New School Montessori in Cincinnati before returning to New York for a degree in interior design. Over the varied course of her career, she’s come to understand that classroom design is about more than just figuring out where to put the desks.

“You can’t design a classroom without understanding the teaching philosophy of the school — those things go hand in hand. The classroom is a teaching tool,” she says.

Fisher learned, through her work as a teacher and as a designer, that student behavior can be influenced for the better by providing a well-thought-out environment. 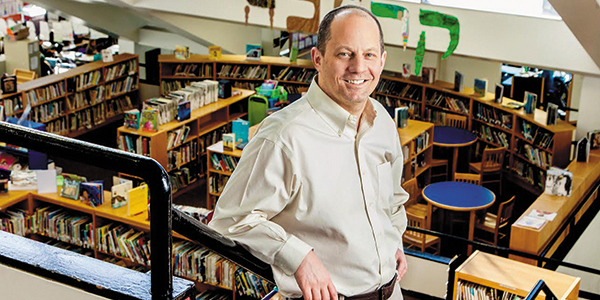 Students on their Feet Give More Focus to Class

Vallecito Elementary School, a public K–5 school in the suburbs of San Francisco, also has adopted standing desks as part of its classroom design.

“We’ve added a lot more choice into the day,” she says. “We might say to the students, ‘We’re going to have you work in pairs, but you can choose to work on the floor, go to the bench outside, sit over here, or stand.’

“They’re so happy to be given choices about how and where they complete their work,” she explains.

The desk, made by Safco, includes a fidget bar — essentially, a swinging footrest — that allows the children to keep moving throughout the day. Students love it.

“We can focus better. We used to sit down and rest, and you almost fall asleep,” says Jackson Wright, a second grader at Vallecito. While there are a few stools the children can use if necessary, he says that they aren’t usually needed.

“We never get tired,” Jackson says.

While ACDS and Vallecito are innovating within fairly standard buildings, SAR Academy, a private Pre-K–8 school in Riverdale, N.Y., is situated in a facility that is far from ordinary. Built on a steep hill, the school has no interior walls. SAR High School, serving grades 9–12, plays off the design of the academy building.

Silberman says the academy visually recalls the seating in a stadium, with its various sections split up by stairs.

This physical reality drives choices when it comes to technology and classroom design. For example, SAR Academy needed a Wi-Fi solution with stadium-style access points, rather than a more traditional enterprise deployment that relies on the segmentation walls provide. The IT team chose Ruckus Wireless.

In the high school, there also is a strong focus on mobility in order to make the most of the space. Teachers can carry their notebooks with them and plug in at any standing desk, accessing what they need via Google Apps; middle school students are part of a one-to-one tablet program, while younger students have access to tablets and Chromebooks on carts.

The schools adopted the Casper Suite by JAMF as a mobile device management tool, says Andy Sandler, technology director for both the academy and the high school. He is particularly excited about Casper Focus, a tool that will allow teachers to easily control exactly which applications are available to students on their mobile device and keep them on task in the schools’ open-plan learning spaces.

Even if new equipment or a major redesign is not in the budget, Fisher says there are small steps schools and teachers can make to maximize the learning experience through design principles within a standard four-wall classroom.

“One of the key things that a teacher can do is to try to think about the room from the point of view of eliminating as much visual clutter as possible,” she says. “Visual clutter inhibits learning.”

Schools can support teachers by simply giving them dedicated space to store the materials that they do not need that month, says Fisher. With excess materials out of the way, teachers can work to create visual order within their classrooms — a design upgrade that is virtually free.

“Teachers can look for what we call in design ‘datums’— places where they can line things up,” says Fisher. By aligning things in the classroom horizontally and vertically, teachers can help students find order.

When the opportunity for bigger changes arises, Fisher encourages schools to work closely with designers who understand teaching, human behavior and aesthetics.

“The ideal of teamwork is really important,” she says, if a school wants to achieve classrooms that are as functional (on many levels) as they are attractive.

The best designs continue to evolve. At ACDS, Baytosh is looking at standing options in the elementary school to complement the ergonomic furniture they put in place there this year. He also is continuing to refine the interior changes the school has made.

“We’re very happy with how we’ve made our spaces responsive to the learning needs of students and the instructional needs of the teachers,” says Baytosh, “and teachers are continuing to find ways to take advantage of that.”

At Vallecito, the district has just passed a bond to fund a study of classroom design. After the enthusiastic response of students and teachers to the introduction of standing desks, Smith is excited to see where the study will lead.

“We’re always prepared,” he says. “We handle the one-to-one mobile deployment one grade at a time.”

Each of these schools shares a dedication to keeping students moving throughout the day — a dedication that will pay dividends for years to come.

While students are being drilled in hopes of increasing their reading scores on standardized tests, Ellen Fisher, dean of the New York School of Interior Design, hopes that educators will take note of the simple, abundant and free resource that can lead to higher test scores: natural light.

Massive quantitative studies have found that when students’ primary source of light is daylight, rather than artificial lighting, test scores improve dramatically. In one study by the Heschong Mahone Group, conducted in 1998 and 2002, test scores were as much as 26 percent higher.

“That’s important information for any classroom teacher, and for designers,” says Fisher — especially when teachers often use windows as a display space for student work.

In her own research, she asked students to draw their ideal classrooms for learning to read and write; they gave her pictures of rooms with trees growing in them and rooms featuring Ferris wheels and trampolines. While fanciful, a lot of the core ideas — that a view of nature or the ability to move around would help in gaining literacy — have been validated by scientific study.

Other classroom design trends Fisher is excited to see implemented in classrooms include: