With its Chromebooks, Google has made serious inroads in the K–12 education market, and now the company is offering the same affordability, ease of use and rich digital-content ecosystem through its new tablets, which have been created with educators in mind.

Why does education need technology specifically tuned for the K–12 environment? Because off-the-shelf consumer technology often comes up short.

“You can't just drop a consumer device in [a school] and wish that it scales. It just doesn't,” Borovoy says.

That’s why the company is rolling out tools that make it easy for schools to manage tablets with simplified setups, allowing IT workers to configure one device and simply bump the other devices to provision them.

“We built this from the ground up to be really, really simple,” Borovoy says. “We took what used to be an hours-long process and reduced it to a few minutes.”

The Joy of Going Google

Joel Handler, director of technology for Hillsborough Township Public Schools, in New Jersey, has been knee-deep in the Google ecosystem for the past two years, and, so far, he thinks the company’s cloud-based, collaborative approach to ed tech is nothing short of transformative.

Handler describes Hillsborough, which serves 7,400 students, as being a relatively techcentric district already, but he realized that a real shift was happening in the district when he witnessed one student earnestly plugging away on a Chromebook while peers exchanged feedback and ideas alongside using the Nexus tablets, which the school district began testing in February this year.

“We've been looking at how technology can be a culture change for our business,” Handler says. “It's fascinating to see what they're doing with those devices.”

In addition to the tablets, which have been deployed to students in grades K–4, the district has been using the new Google Play for Education, which houses apps purpose-built for schools and learning. 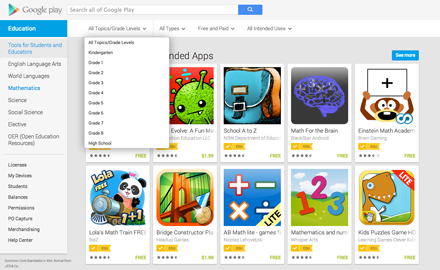 In Google Play for Education, teachers can buy apps with purchase orders rather than with credit cards. And Google has spent considerable time soliciting feedback and insights from educators to build an app store that will best serve teachers’ needs, Borovoy says.

The app store features apps curated by other educators. Additionally, teachers can sort the apps in Google Play by grade level and subject matter. While the education apps will be a key draw for most educators, they also have the ability to purchase the millions of noneducational apps in Google Play as well.

After all, many teachers may opt to use apps that are popular with students to engage them in unconventional ways, like using Angry Birds to teach physics lessons, Borovoy says.