Student privacy is a hot topic in classrooms these days. As more schools invest in technologies designed to engage students and mesh with their increasingly mobile lifestyles, educators and parents have emphasized the importance of teaching students how to better protect their digital selves.

We’ve all heard the horror stories—the teenage girl who was kidnapped after posting images that gave away her location to a stranger online, the child predator who chose his victims by scanning their Facebook pages and arranging encounters via text message.

Laws such as the Children’s Online Privacy Protection Act, or COPPA, were originally drafted to protect children from illegal online intrusions into their personal privacy.

But the proliferation of technology, including smartphones and mobile apps, has put that responsibility squarely on the shoulders of children themselves. Laws are a useful deterrent, but privacy experts contend the only sure-fire way to keep kids safe online is to educate them about the dangers—and what they must do to avoid them.

It’s scary business. After all, teens don’t have a reputation for always making the best decisions. Then again, maybe we’re not giving them enough credit.

Writing for MindShift, Katrina Schwartz details a recent survey from the Pew Internet & American Life Project and points out that children are more concerned about protecting their online privacy than experts probably realize.

According to the survey, 58 percent of teens ages 12 to 17 have downloaded apps from the internet to their mobile phones or tablet devices. Of those, 51 percent say they have steered clear of certain apps due to privacy concerns.

Even more encouraging, some 26 percent of teens said they disabled or uninstalled an app from their personal device after learning that the app was collecting certain personal data about them. Forty-six percent of teens say they have turned off location tracking services on their mobile phones to reduce the risk of personal privacy intrusions.

The infographic below details these and other encouraging findings from the survey. What do you think? Are schools making progress in their efforts to educate students about the importance of online privacy? Let us know in the comments. 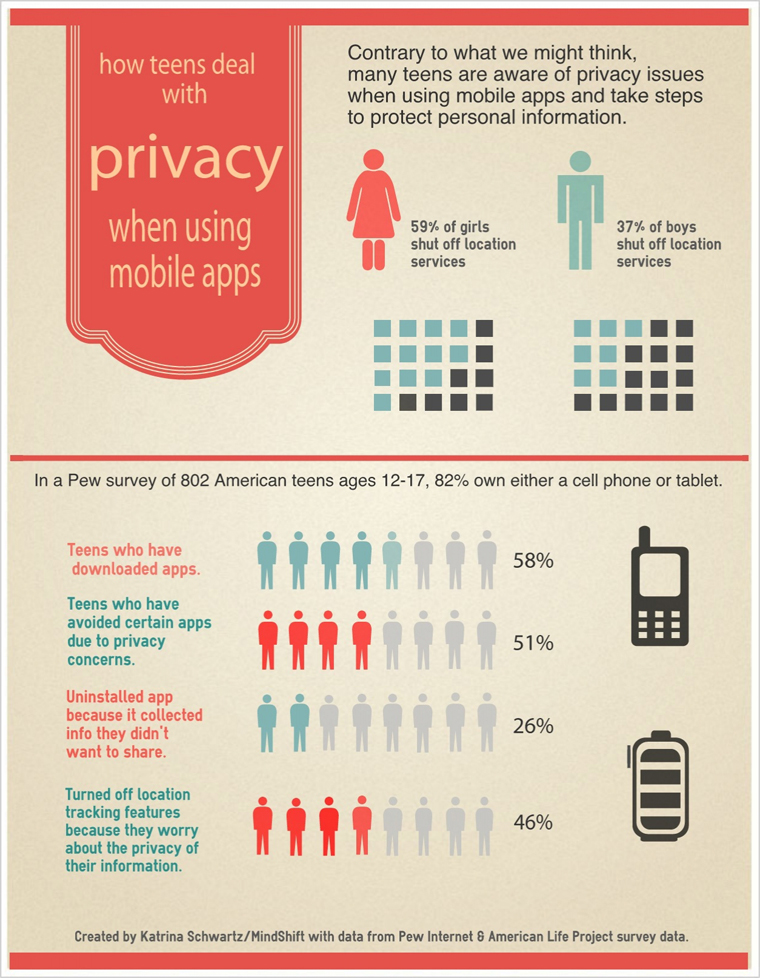