For today’s college football players, catching a pass may not even require another player. Or a ball.

Increasingly, college football teams are making virtual reality an integral part of their training and recruiting processes. So much so, that VR usage by Stanford University’s football team sparked the launch of an entire company, STRIVR Labs, which now offers VR training to athletic departments and corporations alike.

Here are three ways that college football programs are making use of VR:

With only six home football games per season, Iowa State University found it difficult to leverage the game day experience as a recruiting tool. That is, until it embraced VR.

In the VRAC’s C6 virtual environment, 24 Sony digital cinema 4K projectors display more than 100 million pixels on the walls, floor and ceiling of a 10-by-10-foot room. Recruits can wear 3D glasses and interact with each other and opposing players on Iowa University, Iowa State’s biggest rival, to get a realistic feel of a game-day atmosphere.

“You can put yourself into the middle of the action,” James Oliver, the director of the VRAC, tells EdTech.

In a virtual environment, Unimersiv blog notes that athletes can practice skills under very similar pressures to a real game.

“Imagine a baseball player who can practice his swings as many times as he wants against a virtual representation of his opponent,” reads the blog. “Not only can he analyze the intricacies of his throw, but the simulation can be set up to let the batter practice at his or her own level.”

Zerrick Cooper, a backup QB on last season’s team, “worked out” in the VR lab to familiarize himself with plays he didn’t get to practice.

“He was able to sit in my meetings for 30 minutes, and the other 30 minutes, I’d send him to the VR room, which is right next to my room, and he would go through all of the concepts, cross it off in the playbook and he’s ‘in’ the game,” Clemson QB coach Brandon Streeter tells Fox Sports.

Former Temple University quarterback Phillip Walker was unable to practice because of injury before the 2016 American Athletic Conference championship game — the biggest game of his team’s season. Fox Sports reports that Walker was able to do his reps with VR. He completed nine of 11 passes in the game and was named Most Outstanding Player in a victory over Navy.

“I’m a huge, huge believer in virtual reality,” says former Temple coach Matt Rhule in the Fox Sports article. “We had it for the last two years and won 10 games in each of those years. I think the eyes are one of those untrained aspects of football.” 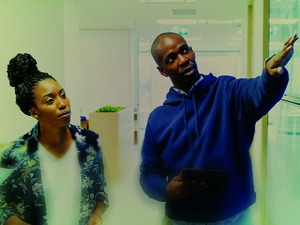