Xbox 360 for Education Has (Almost) Arrived 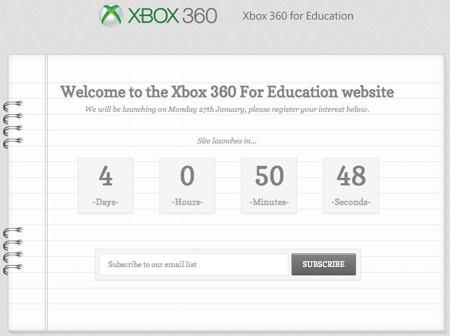 Audrey Watters gave us a heads-up that Microsoft is launching an Xbox 360 for Education site in Europe next week:

Programming lets you bring your ideas to life, and with the launch of Xbox for Education, Microsoft is trying to making programming more exciting and interesting for students of all ages. With Xbox for Education and Microsoft DreamSpark we’re getting students coding in C# and XNA and we hope to aspire tomorrow’s games developer and help students learn a lot about how games work and even create totally new ones of their own.

Earlier this week, we noted that The Walking Dead MOOC completion rate was just 3 percent. We were later corrected — it was actually 10 percent — but that isn’t enough to change the questions surrounding MOOCs. As Cecil College vice president and CIO Stephen diFilipo tweeted in response to our article, “… the ecosystem of MOOCs is about reach, scale & access. Traditional metrics don't apply.”

The same day our article was published, Harvard and MIT weighed in with new data on 17 MOOCs. It turns out The Walking Dead MOOC was actually above average:

The papers released on Tuesday draw on data from 17 MOOCs offered by Harvard and MIT in 2012 and 2013. A number of academics have begun studying aspects of the MOOC phenomenon, but few academic papers have been published so far.

The first of the working papers, which was written jointly by researchers at both universities, provides an overview of the data from those 17 MOOCs. Some findings: