Providing a safe, effective place to learn is the goal of every educational institution. However, the larger and more sprawling the campus, whether horizontally over many buildings or vertically through multiple floors, the more difficult those goals become. Adding more cameras can improve security, but networking them together isn’t always easy. And more space creates more challenges in coverage and connectivity.

Setup of the 3916ic AP is extremely easy. It has several mounting options for walls or flat surfaces, as well as the ability to safely attach to a drop ceiling. Once in place, the camera can rotate 360 degrees and move 112 degrees vertically, so it can point its gaze wherever needed.

A user can lock down the camera with a thumbscrew to prevent an unauthorized person from rotating the camera out of position. A Kensington lock slot serves to deter theft.

Because the 3916ic AP is Wave 2 gear, it can accommodate more users simultaneously. In testing, the device was able to make use of its entire gigabit bandwidth channel, even with multiple users and devices vying for a share of the pipeline.

The camera is also impressive. It’s able to record high-resolution images and, thanks to an infrared mode, works well in low-light conditions. An integrated microphone complements the recorded video so security staff can hear what’s happening in the environment being monitored. 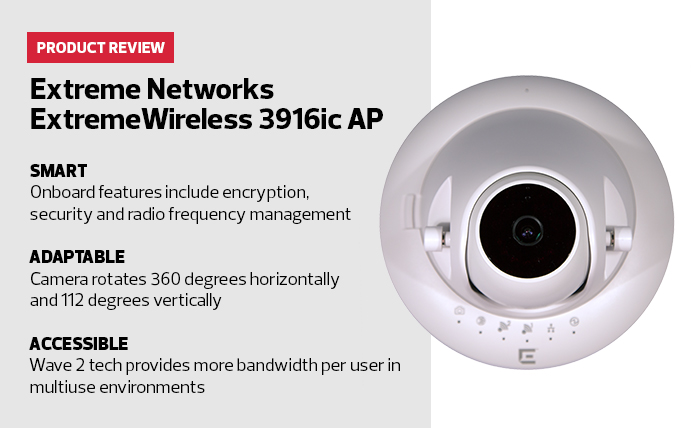 Because this combination device is new to the market, it’s likely that many IT professionals have never considered pairing a security camera with an AP. But in educational environments that make ample use of both tools, a dual major in connectivity and security is a smart move for the 3916ic AP.

Obviously, adding a security camera to a wireless access point is the most notable feature of the 3916ic AP. But the AP is impressive on its own merit. It makes use of the 802.11.ac Wave 2 with multiple user, multiple input and multiple output (MU-MIMO) technology, enabling more users to get better connectivity for their wireless devices.

In fact, without MU-MIMO, it’s almost impossible to utilize the entire gigabit pipeline on most APs. MU-MIMO fixes this by basically tapping into that unused part of the bandwidth stream to provide the dedicated connections, freeing up the rest of the pipeline for everyone else. When tested, the AP 3916 could provide its entire bandwidth stream to devices in the trial network.