Elizabeth Kemp, an assistant professor in the English as a second language program at Imperial Valley College in California, is one of a growing number of educators who are embracing the instructional method “active learning.”

In an active-learning classroom, or ALC, students engage in collaborative reflection, problem-­­ solving, listening and discussion. Unlike traditional lecture halls, these rooms put students at the center, often seated together around tables featuring laptops, document cameras and connections to shared displays.

Over the past three years, Kemp says, Imperial Valley has transformed more than a dozen classrooms into ALC-style spaces the college calls “smart classrooms.” Teachers get up to speed on the technologies through a short one-on-one tutorial with an expert from IT, and they can sign up to use the rooms as they like.

“I love them,” Kemp says. “I think they’re fantastic. It did take me a little while to get comfortable with everything, but now I’m at the point where I really rely on them, and my students prefer we use them as well.”

The supporting technology at the heart of Imperial Valley’s ALCs is the Extron DTP CrossPoint 84, a 4K “matrix switcher” that enables complete audiovisual integration — all in a box about the size of a stereo receiver. In each room, the switcher supports two displays: a 5,000-lumen Epson LCD projector and an NEC MultiSync flat-panel monitor, say Director of Enterprise Systems James Arthur and IT Support Specialist Jesus Valenzuela.

Working from a Spectrum Industries Media Manager lectern, instructors can easily switch between sources (such as PCs and document cameras) and displays using an Extron TouchLink Pro Touchpanel controller. “You can pretty much control anything from that,” Valenzuela says.

The lectern has a built-in PC running Windows 10, can play Blu-ray files or DVDs, and is wired to an Elmo Visual Presenter in the ceiling. That means instructors can display documents, or any other material, on either of the two displays, Valenzuela adds. 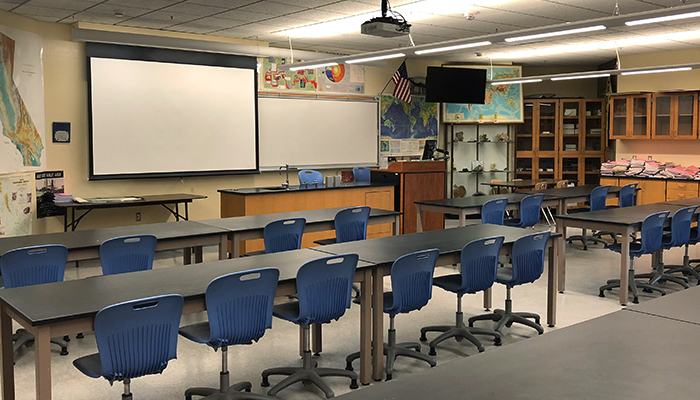 Classroom arrangements like these are becoming more common on campuses nationwide, says Malcolm Brown, EDUCAUSE’s director of learning initiatives. In fact, an EDUCAUSE survey of more than 900 professionals identified learning space design as a key issue for 2018 — a sign that educators are rethinking pedagogy from the ground up.

“It’s clear to me that the conversation has shifted,” Brown says. “It’s no longer ‘Do you have an active-learning classroom on your campus?’ but ‘How many of these rooms do you have, and how are they designed?’ These spaces are becoming very mainstream, and I think they’ll only become more so in years to come.”

Active learning has already made its mark at the University of Iowa, which in 2009 launched the TILE (Transform, Interact, Learn, Engage) initiative. The program was designed to explore “active-learning strategies in learning spaces with purpose-built technologies and furnishings,” says Chris Clark, a director in the Office of Teaching, Learning and Technology.

Like most ALC spaces, the first rooms established under the TILE umbrella included round tables, each with three laptops and seating for nine students.

“We had a monitor for every table,” Clark says, “and we tied those together into a big AV system so the instructor could send content to every person in the room.” In keeping with the multi­directional flow of ALCs, students can send content from wherever they sit. 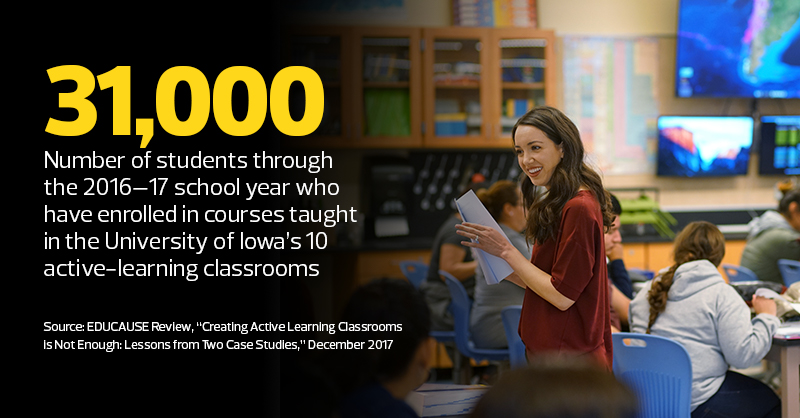 From the earliest days of TILE’s existence, program leaders have consistently engaged faculty to ensure that classrooms were in line with their needs and objectives. “In some cases, we’ve removed some of the technology in an active-learning classroom, or we’ve changed the table structures to make them work better for our instructors, while in other cases we’ve added technologies if it was clear they would add value to the space,” says Clark.

Today, he says he’s continually impressed by the diversity of faculty who opt in to the program.

“We’ve had strong adoption in our hard sciences, social sciences and humanities. Pretty much every discipline has embraced it in slightly different ways,” Clark says.

Tech-Enhanced Classrooms Are in Demand on Campus

The University of Oklahoma, which opened its first ALC in 2012, has seen a similarly enthusiastic response.

“We took this old and kind of regular classroom,” recalls Erin Wolfe, executive director of OU’s Office of Strategic Initiatives, “and we renovated it into this stellar example of what active learning is all about.”

OU staff incorporated computers, movable displays and whiteboards. Once the room was up and running, they asked students and faculty for feedback they could incorporate as they created more active-learning spaces. OU has since worked with Dell and Intel to design a classroom, and it has 14 ALCs spread across various departments.

One sure sign that the classrooms are delivering what faculty want, Wolfe says, is that “all of the rooms are booked every semester.”

Over the years, Wolfe and her colleagues have developed a definition of active learning that includes a range of pedagogical techniques. “It’s sort of a spectrum. If you’re getting your students to be engaged in class, if they’re taking content from the class and problem-solving with their peers, and if they’re learning how to apply what they get in that classroom to real-world, workplace situations — that, to us, is active learning,” she says.

As far as the role of technology in this realm? “That’s really the icing on the cake,” she says. “You don’t need to have a room that’s technology-enhanced, but when you do, it can help you take active learning to the next level.”

Educators who want to evaluate their own active-learning spaces against a set of best practices can do so using an EDUCAUSE resource called the Learning Space Rating System. The LSRS is similar to the popular rating program for LEED, or Leadership in Energy and Environmental Design, but is tailored to higher education.

Instead of measuring sustainable building design, it tries to measure how well the design of a classroom supports active learning,” says Malcolm Brown, the director of learning initiatives at EDUCAUSE.