Dave Tatum is not an interior designer, and he doesn’t want to be an architect. But he does appreciate an aesthetic, functional space — and last summer, he helped to create one from scratch at Florida’s Daytona State College, where he is the associate IT director.

The IT department needed a major overhaul, and the time had finally come to get the project off the ground. At that time, Tatum recalls, his field techs worked in a traditional office environment: standard-issue desks, chairs and “lots of cubicle walls.”

The office lacked a common area where technicians could collaborate, as well as a dedicated room to brainstorm. The space also didn’t optimize employee productivity. “Everything was always cluttered with hard drives and spare parts — carcasses of computers all over the place,” Tatum says. “We decided we should start with a blank slate and really think about it as a functional and technical workspace.”

A Better IT Workspace Creates Efficiency

Now, staff meet visitors in a reception area where Tatum, the network managers and two infrastructure specialists have their offices. If a customer’s device can be fixed on the spot, staff bring it down the hall to a kiosk, where a tech makes the repair. For devices requiring more attention, staff check them in and shuttle them to an adjacent room that houses what Tatum calls the “crown jewel” of the renovation: a 21-foot-long, countertop-height workbench with room for 14 individual workstations. A fleet of widescreen monitors hangs over the work area, and two TVs display work orders as they come in.

“As a tech sitting at your desk, you’re always bending over when you work on things,” Tatum says. The new setup “lets you stand if you want to, so it’s much better for your neck and back. And because we have the tickets popping up on the TVs, it’s easy to track who’s taking care of what to make sure we’re responding to problems as they occur.”

IT Needs Tech Upgrades Too

The team also has a new, glass-walled room they’ve dubbed “the aquarium.” The space was designed for efficiency and functionality, Tatum says, like the renovation as a whole. With an Epson BrightLink 695Wi interactive projector, a conference phone and plenty of whiteboard space, it gives employees a quiet, private area for conversation.

Daytona State isn’t the only institution to decide that it’s time to revamp the IT space. At Binghamton University in New York, the IT Services department recently altered its layout to give staff a dedicated area to work on equipment. In this case, the renovation preceded a restructuring of the support team, says Michael Allington, the university’s director of technology support services.

To facilitate more teamwork, the reorganization combined two groups (desktop and public computing support staff) into a single device support group. Team members still have their own specialties, says Allington, but everyone works in the same area and within a few steps of the department help desk. 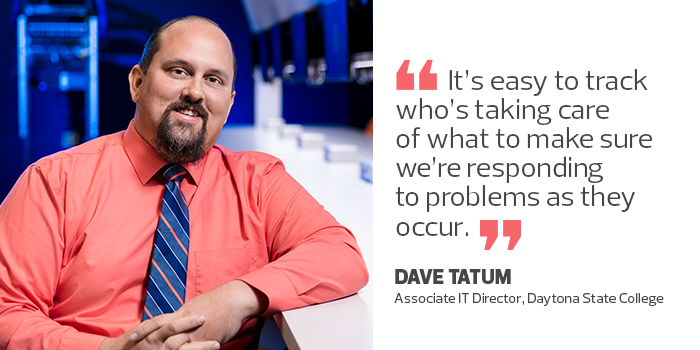 “The idea is that the help desk has easy access to them if something comes up,” says Allington. “Because everyone is together, the goal is for them to potentially learn from each other and to have them collaborate on certain jobs.”

Making it easier for colleagues to collaborate is a major benefit of interior redesigns. But improvements often pay off for customers too. Providence College in Rhode Island just finished construction on a new self-service suite in the college library’s lower level. The primary goal was to make the space more welcoming by replacing internal walls with glass partitions, says Senior Vice President for Finance and Business John Sweeney.

“It had been relatively dark down there, so we tried to bring natural light into the area by opening it up,” he says. The suite reflects a partnership between IT services and the campus departments that use technology to support teaching, learning and research, Sweeney says: “Rather than everyone being spread out in different offices, now they’re in this one open setting with clear lines of communication.”

Among the many service upgrades are a combined walk-in service desk and support hotline. “Now, if you have a tech problem, you don’t have to waste time figuring out who can help you,” Sweeney says. He also points to a new shared ticketing system for prioritizing work orders and tracking them to completion. “So much of what we did is about improving efficiency, but it’s also about creating a positive user experience.”

IDC has noted that campus support services, in general, are changing to reflect a new user experience.

For IT professionals, he says, the driving question then becomes, “how can the service desk be efficient and cost-conscious, while remaining highly effective?”