Consider this scenario: A facilities engineer on a college campus discovers a failure in an HVAC controller that may cause the system to dump too much cold air into a room.

To compensate, the HVAC system reheats the extra cold air to maintain the desired comfort level, wasting energy and money in the process. The room’s occupants have no reason to contact facilities managers, which means technicians aren’t aware of the glitch.

Problems like this are common, costly and tough to solve. But institutions are starting to use the Internet of Things (IoT) — pairing connected sensors with analytics software — to fix them. And they’re saving big money in the process.

Energy engineers at the University of Nebraska–Lincoln were mindful of simultaneous heating and cooling issues when they implemented an environmental fault detection and diagnostics system two years ago. So, as they installed thousands of networked room sensors, they included an algorithm designed to spot HVAC breakdowns. 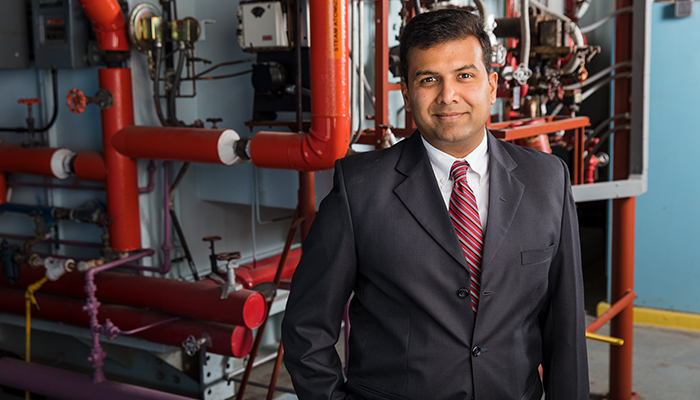 Lalit Agarwal says IoT initiatives around energy conservation are helping the University of Nebraska–Lincoln save thousands of dollars annually. Photo by Geoff Johnson

“Lo and behold, a room in the Law College showed up with the heating and cooling problem,” says Lalit Agarwal, the university’s director of utility and energy management.

Fixing the flawed air conditioner damper saved the university a modest $300 per year in excess energy costs. But the financial implications go well beyond that, Agarwal says: “Think about how many rooms we have on our campus. If just 5 percent of them have the same failure, we are looking at thousands of dollars a year in excess costs — for just one type of problem.”

In fact, by Agarwal’s estimate, data-driven energy management activities have yielded about $200,000 in cost-avoidance savings in one year. Those savings likely will grow as facilities engineers continue to combine IoT with other technologies to proactively address HVAC issues that waste energy.

Says Agarwal, “We’ve had instances where technicians show up to fix a classroom’s ventilation system, and the instructor says, ‘But I didn’t call for anybody.’ The technicians say, ‘We know, but you probably would have in a month.’”

“Energy management is right up there among the most compelling applications for IoT because it often results in direct cost savings,” says Steve Hoffenberg, the director of industry analysis, IoT and embedded technology at VDC Research.

“Ideally, the analytics should be self-learning, so that it understands energy consumption patterns for a specific building and optimizes it based on actual usage, such as real-time occupancy,” Hoffenberg says.

On the horizon, he says, are energy-related IoT systems that mix building sensory data with third-party weather data to help facilities staff manage energy consumption based on prevailing environmental conditions.

The rewards of IoT can be significant, but Chuck Benson, assistant director for IT, facilities services, at the University of Washington, says stakeholders may need to align their priorities. “There needs to be a lot of coordination to get these departments to work together closely,” he says.

In particular, IT and operations staff tend to approach such projects in unique ways. “These professionals even see time differently: IT people are patching and changing systems on a daily and weekly basis. OT people think in terms of buildings that last decades,” Benson says. “It takes work, and regular meetings that start early in the process, to bring these two groups together.”

“Engineers get enough information to see possible faults and get a starting point for determining potential causes,” Agarwal says.

Multiple databases support the platform, including those running Microsoft SQL and the open-source MariaDB technology. In addition, Agarwal and his staff are always on the lookout for innovations in data-driven energy management. “Cloud-based machine learning applications in Microsoft Azure and similar technologies may help systems learn how to reduce the time needed to identify HVAC faults,” Agarwal says. “That is definitely an area for us to investigate for the future.”

The university’s fault detection and diagnostics system also supports an ongoing building recommissioning project. So far, more than a dozen buildings have been reconditioned for energy efficiency.

“After we perform a full tuneup on HVAC equipment in older buildings, the IoT sensors, working in conjunction with the detection and diagnostics system, enable us to keep our eye on performance, so we can keep the systems running as optimally as possible over time,” Agarwal says.

Recommissioning has reduced overall energy consumption by 17 percent and counting, he adds. “We’ve addressed barely 10 percent of the 130 buildings, so we expect even greater savings as we continue on this path,” Agarwal says.