Campus safety officers at the Claremont Colleges system in California used to end their shifts with an hour or two in the office, digging their way out from mountains of incident reports and other paperwork that piled up throughout the day.

Now, armed with iPad minis, patrol ­officers can file reports from the field, even taking and attaching photographs. The result, says Stan Skipworth, director of campus safety at the Claremont University Consortium, is that officers spend more time patrolling campus and less time on administrative duties.

“The iPad minis allow officers to stay out in the field for greater periods of time and keep them from having to come back into the station,” Skipworth says. “They can continue to meet with people and do community-oriented policing, visit with more folks and keep an eye on what’s going on. And it eliminates, or dramatically reduces, delays in the ability to respond to reported activity.”

When tablets entered the marketplace less than a decade ago, many in education saw them primarily as classroom tools that would let students create and consume content. But as the mobile app market matures, colleges are finding innovative ways to use tablets to support workers in departments such as campus safety, food services, facilities and administration.

“There is a lot of form-factor convenience,” says Bryan Alexander, an education technology consultant. “The tablet is the sweet spot between a laptop and a phone. People aren’t picking it because they want to be tech-savvy. They’re picking it because it simply works.”

Tablets Are the Perfect Fit for Modernization

Without an appropriate use case, a tablet can feel like a “middle child” device: not small enough to displace the smartphone, but perhaps not robust enough to substitute for a laptop. But when an institution finds one or more tasks uniquely suited to tablets, the devices quickly become invaluable time-savers and productivity enhancers.

“Matching the technology with the need is really, really important,” Alexander says.

Tablets often shine in scenarios where they can replace expensive or cumbersome stand-alone systems (such as point-of-sale systems in cafeterias) or paper forms (such as campus safety incident reports).

One way to brainstorm appropriate use cases for tablets, Alexander says, is to think of them as high-tech clipboards. When a department has a standardized form — for example, a survey at a student health center — tablet apps with dropdown menus can eliminate paperwork and streamline processes. In some cases, a tablet’s microphone and camera might add value, but in others, users need only the touch screen.

The University of Connecticut is preparing to deploy tablets for just such a use case, ordering 200 tablets for facilities staff who have to complete work orders. “They can enter their findings in the app without having to go back to the office,” says Jila Kazerounian, UConn’s manager of applications and technology solutions. “It saves a lot of time. It is light. They can carry it wherever they go, and they can access their work orders wherever they are.”

The university’s IT Services department also developed a mobile app that lets anyone on campus report facilities issues: Users can attach photos, and the app automatically identifies the sender’s location.

Institutions often find that when they deploy tablets to accomplish one goal, such as increasing employees’ efficiency, they gain additional benefits. For example, students at the University of Connecticut use tablets to swipe in to dining halls. The larger screens permit better facial recognition, which helps reduce instances of students using each other’s IDs.

For employees such as counselors, the tablets primarily serve to reduce paper and simplify organization. But Tagliareni says the Surface cameras are particularly helpful for maintenance workers.

“A picture is worth a thousand words,” he says. “It’s one thing to get a text message that says, ‘We have a pothole here.’ It’s another to see a picture of something so big that it could swallow a golf cart. It absolutely helps them prioritize their limited resources.”

Although many Washburn staffers already have the option of using tablets, Tagliareni expects adoption to skyrocket after the university completes a campuswide refresh of its wireless network. Until recently, he says, the university relied on aging 802.11n equipment, which throttled connection speeds and often led to Wi-Fi drops midsession.

“When they laid the existing equipment out, it was more about coverage,” Tagliareni says. “Things have changed a lot in the past five years, where now you really have to look at density.”

Washburn is adding approximately 175 Ruckus R720 802.11ac Wave 2 access points and beefing up its switching. “I think that once employees see that wireless can be stable and just as good as a wired connection — and once they start feeling comfortable that this is a proven solution that can help them — we’ll see it go off like gangbusters,” he says.

Although most institutions would not undertake costly wireless upgrades to support tablet use alone, many have already made large Wi-Fi investments to meet student demand. Plus, enterprise mobility management tools have evolved in recent years, making it easier to protect data. Mobility has become so pervasive — and mobile apps so intuitive — that tablet deployments no longer require intensive employee training.

“The technology is so ubiquitous that you don’t have to worry about lengthy training,” says Brian Dunnigan, a web designer and mobile app administrator at UConn. “The knowledge is already there.”

In short, several factors have coincided to make tablets more attractive than ever. “People use their mobile device for everything these days,” Kazerounian says. “It’s intuitive.” 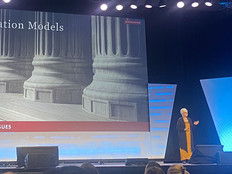 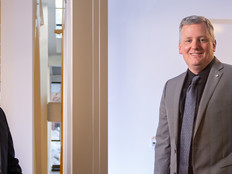 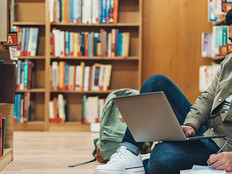