In June 1971, engineers at the University of Hawaii unveiled the pioneering computer networking system ALOHAnet. The network was a computing landmark, both because it was the first to connect computers via radio communications and because it introduced the computing world to random access protocols.

Forty-five years later, Norman Abramson — who led the creation of the network as a University of Hawaii computer science professor — is reminded of his work everywhere he looks.

“We’re talking by means of random access packets that are being transmitted by radio,” says Abramson, now a U.H. professor emeritus living in California. “It’s everywhere. It’s in Wi-Fi, your mobile phone, Ethernet, it’s in cable. The reason it’s used so much is that it’s simple. It’s the simplest thing you can think of. And simplicity has an awful lot to recommend it in technology.”

If the idea of random access is simple, that doesn’t mean it’s obvious. At least it wasn’t obvious to Abramson — or, indeed, any of the world’s other top computer science researchers — 45 years ago.

The History of ALOHAnet

In the late 1960s, Abramson and his team set out to connect computers across the University of Hawaii system using radio communications.

From there, Abramson says, it took three or four months for his team to land on random access protocols — which would allow computers to transmit packets “at will” as soon as they had information to send — as a way to enable this new networking technology. This new way of sending packets meant that transmissions would sometimes collide, but Abramson and his team solved this by allowing terminals to resend failed transmissions.

“In a sense, it’s an obvious thing to do,” Abramson says of random access. “But when you start off on this kind of research project, some of the obvious things don’t appear as obvious as they do a little later.”

“First of all, of course, there was no Internet,” he adds. “Second of all, there weren’t even any PCs. The whole digital structure that we’re accustomed to living in today didn’t thrust itself on society and culture. Forty-five years ago, we didn’t realize we needed ALOHA. The concept of mobile communications was many years in the future.”

Smartphones and wireless access points weren’t even a glimmer in anyone’s eye yet when Abramson and his team were developing ALOHAnet, but the networking technology would eventually enable those IT breakthroughs. Abramson couldn’t have predicted how the IT landscape would unfold over the next four and a half decades, but he sensed that he and his team had hit upon something significant.

“We realized that what we wanted to do would be fairly important, because people really did need to start connecting computers,” he says. “We just knew that this was a good way to start it, that radio communication was a very important addition to what existed in the world. We thought that what we were doing would be important, but I don’t think any of us thought it would be as important as it turned out to be. It exceeded my wildest expectations.”

Bill Richardson, director of the University of Hawaii Office of Technology Transfer and Economic Development, calls ALOHAnet “earth-shattering technology.” In 1971, no office existed to help the university and the researchers capitalize on the commercial applications of their work, and so the technology was put into the public domain.

“If [the team] had preserved a millionth of a cent for every packet that flows with their technology,” says Richardson, “they’d be richer than California.”

“Part of ALOHAnet’s legacy is the reminder it provides of the importance of innovation, especially to a small state like Hawaii,” says Todd Nacapuy, the state’s chief information officer.

More IT Innovation from the Aloha State

Jason Leigh, director of the Laboratory for Advanced Visualization and Applications (LAVA) at U.H. Mānoa, is currently at work on the latest iteration of his Cyber-enabled Collaboration Analysis Navigation and Observation Environment (CyberCANOE) system, thanks in part to a $600,000 grant from the National Science Foundation.

Leigh describes CyberCANOE as “the Batcomputer in Batman, but for scientists.” The system crunches large data sets and translates them into images on high-resolution screens. 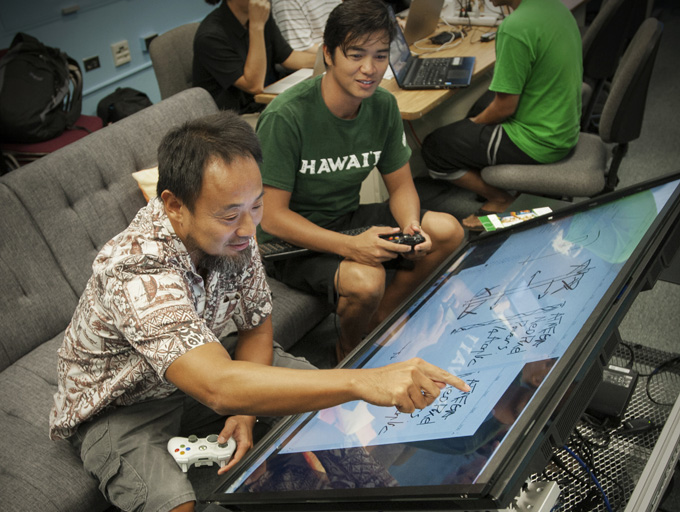 Leigh demonstrates a concept inside the LAVA lab. Source: U.H. Mānoa via Flickr

“It’s almost an endless wall of screens, with incredible resolution and image quality, and it’s designed to let scientists, engineers and artists look at the images that are translated from their data,” he says. “Think of it as a lens for looking at data. When we learned biology and chemistry in high school, we put the specimen under the glass, and we would stare into the lens. These displays are essentially the next-generation, high-quality lens for looking at large amounts of information.”

Leigh hopes that, like ALOHAnet, his own work will have a lasting impact on the tech solutions of the future.