The proliferation of mobile devices within educational settings, whether for teaching or personal use, creates the need for higher ed IT to manage wireless traffic as efficiently as wired networks. Certain apps, users or transmissions should be prioritized; others can be throttled back without really harming their delivery. But this is easier said than done.

Most wireless network management requires setting up Control And Provisioning of Wireless Access Points (CAPWAP) tunnels, which makes detailed quality of service difficult. Most campuses simply put up a lot of wireless hubs and hope for the best.

The Cisco Systems Catalyst 3850-48F-S is a 48-port switch that adds a wireless controller in a network switch, unified under a single operating system. This allows administrators to set policies to apply equally, and automatically, to both wired and wireless networks. The 802.11ac-ready wireless controller can work with very large networks, with up to 40-gigabit-per-second wireless throughput, plus support for up to 50 access points and more than 2,000 simultaneous wireless clients.

The Catalyst 3850 is also a powerful wired switch, with 480Gbps stacking bandwidth and support for desktop Gigabit connections. We connected it to several desktops within a test bed and had five wireless hubs feed their clients into the same switch, all of which barely scratched the surface for the 3850 in terms of performance. We could measure bandwidth and determine how the switch routed both wireless and wired traffic equally, based on universal policies put in place through the interface. In one case, the 3850 prioritized a particular streaming application, whether it was served through a desktop on the wired network or via a tablet connecting wirelessly through a managed hub.

Administrators can tailor policies to better manage complex setups, including priorities based on factors such as service set identifier, radio frequency or exclusive wireless applications.

While most of our team’s performance testing was done with a single Catalyst 3850 switch, we also combined three switches into a network, where they can take on even more roles in the management of a wired/wireless deployment. The setup would be especially useful for very large deployments that go beyond the 50 access points supported by a single core switch.

The first switch in such a setup — at the bottom of the chain, closest to users — becomes a mobility agent and can support up to 50 Control And Provisioning of Wireless Access Points (CAPWAP) tunnels terminating right on the device. The 3850 can unscramble all that wireless data and assign priorities and access based on whatever ruleset is configured on the device — rules that also can apply to the wired network traffic.

The same switch also handles tasks such as radio mobility management, which essentially turns it into a mobility controller. Users can logically group different 3850s according to their own preferences, although it makes sense to categorize them based on factors such as location (which ensures, for instance, that campus science labs get one controller group and the library gets another).

The 3850s at the bottom of the chain (there were two in our test setup) are linked to a third switch that can handle all of the heavy lifting and connections that occur between switches. The setup creates an overarching mobility group that can manage quite a lot of traffic, including that generated by a very large campus — or a popular part of campus — with a lot of buildings and even floors jammed with wireless hubs.

The 3850 can take users even further than that, because each of those mobility groups can be linked automatically to other groups, making the network’s top end unlimited. On our three-switch mobility group (somewhat tiny by comparison), we were able to set single policies based on factors such as security or application priority, to apply to every single mobility group, switch, hub and wireless user — as well as to the wired network — across an entire organization that could grow to an unlimited size.

No matter how large a network grows, either wirelessly or through cables, the Cisco Catalyst 3850-48F-S switch can grow alongside it, while still providing network administrators with a single point where everything can be managed. This will ensure proper bandwidth allocation and quality everywhere on campus, regardless of the device used or delivery method.

Smart
Combines a wireless controller with a wired network switch 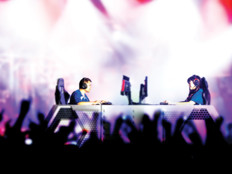