Do wearable technology devices have a place on college campuses?

There is great potential for such devices, but they are far from being considered essential tools to most students, according to a report by Amy Schmitz Weiss, an associate journalism professor at San Diego State University.

The 21-page report, titled “Wearable Technologies: Possibilities in Bringing Innovative Learning Experiences to the Classroom,” analyzes the responses of 454 college students to an online survey about their exposure to wearable technologies and their perception of the potential for the devices in higher education.

“This study shows that the adoption of wearable technologies among young adults remains in a very early stage. … Furthermore, there is a greater awareness of wearable technology devices, but less people who actually own one,” Schmitz Weiss writes in the report’s conclusion.

There's a market for wearable devices in higher education, but the biggest barrier for the technology finding acceptance among students is the lack of a killer app for the platform.

Students honed in on the multimedia, information gathering and storage features of the technology as learning aids. Nearly 75 percent of respondents said they could see wearable technology used to record class lectures and more than half saw its potential for taking notes, taking photos related to a class topic and gathering information for class.

Wearable technology also hasn’t escaped the attention of the New Media Consortium’s (NMC) Horizon Report, which tracks rising technologies and their impact on industries. In the agency’s 2015 Higher Education report, wearable technology was among six tech developments listed. NMC predicts that the devices will make a splash on college campuses within two to three years.

"Wearable technology is poised to see significant growth in the coming years, spurring experimentation in higher education because the demand for wearables is seen to be coming in large part from college-aged students," according to the Horizon Report.

Key findings from Schmitz Weiss' report was gathered into an infographic posted on PBS MediaShift. 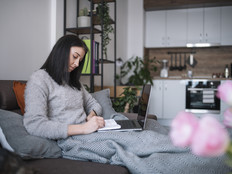