Could a mobile-powered platform be the future for competency-based learning?

There is a competency-based educational shift under way in higher education. The learning method allows students to pursue career-focused topics at a self-directed pace, demonstrating mastery of skills in order to progress to the next stage of education.

The teaching method, also known as direct assessment, has been gathering steam across higher education. The University of Wisconsin has found success through its Flexible Option plan, a competency-based educational curriculum for students who want to pursue a degree, but don't have time for traditional classes. And Purdue's Polytechnic Institute rebranded itself as a competency-based school in 2014.

Flat World offers digital learning solutions, including digital textbooks, courseware and learning platforms — all with an emphasis on mobile access. The company's mobile mastery coalesced with Brandman University's desire to expand its student reach through a new, competency-based educational offering in 2014, and so a partnership was born. “It's a very exciting time to be a part of this industry," says Flat World Education CEO Chris Etesse .

Etesse, a former developer for Blackboard, says the current atmosphere in higher education reminds him of 1998, when learning management systems were just making waves in the industry.

"We're at a similar time period, where there’s a lot of excitement building around a new way of teaching and measuring its effectiveness," Etesse says.

The mobile pilot at Brandman University began in December and has attracted nearly 100 students. Etesse calls that a good start to the program, which he projects will expand from nontraditional students to more traditional higher education applications in the future. Brandman's pilot is one of just four similar programs in the nation to receive both federal and state accreditation.

Competency-based learning is not a panacea — it’s about easing learning for the benefit of students, Etesse says. That idea was integral to the design of the program's mobile app, which features a "learner-centric paradigm."

"We wanted to create a next-gen user experience that's not focused on classroom efficiency, but on what the learner wants to do," Etesse says. "This helps them concentrate on just learning."

The mobile app incorporates text, video, interactive Adobe Connect sessions and asynchronous social posts into the curriculum. And all of these elements come with mobile-powered accountability.

"We track every touch and time on task, every social posting on the project work. And we pull in faculty and coaches as needed if students are at risk or have slowed down in their progress," Etesse says.

Over the next three to five years, Flat World will be developing algorithms based on the data they've collected to improve the program further.

"It's a very exciting time to be a part of this industry," Etesse says. 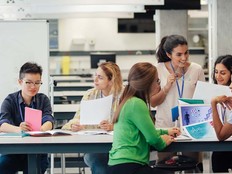 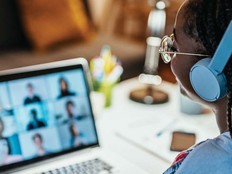 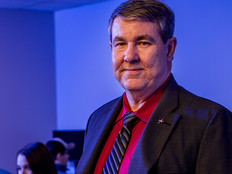