Professors may scoff at the idea, but students are increasingly citing tweets in academic papers. Although they don’t exactly count as peer-reviewed, tweets do provide interesting insight into pop culture, breaking news and a number of social issues. After all, the Library of Congress is indexing tweets for historical reference.

As a result, it’s important that style guides address the issue, and that students understand how to properly cite their sources.

How do you cite a tweet in an academic paper? Here's how.http://t.co/hWyeiKVX6J Pls don't cite too often. #HigherEd pic.twitter.com/p3k2NyuXNY

The tweet above, from Boston University professor Adil Najam, alerted us to this apparently controversial topic. Charlie Osborne explains on ZDNet:

Its academic value is debatable, and although it probably will not take the place of a journal or full research publication in terms of academic value, a tweet can offer value in a number of other ways.

Sometimes, especially if received from volatile, politically unstable places, tweets can pack quite a punch out of a mere 160 characters. As a means of conducting academic research, Twitter can be a rich platform for both academics and businesses to explore public opinion on topics, gain news 'from the ground', and check for updates on a situation more quickly than traditional media outlets can publish.

For students who plan to cite tweets on a regular basis or need to cite many at once, developer Ben Hedlund built the site Tweet2Cite. Users paste in the URL of the tweet they need to cite, and then the tool generates citations in MLA and APA style. 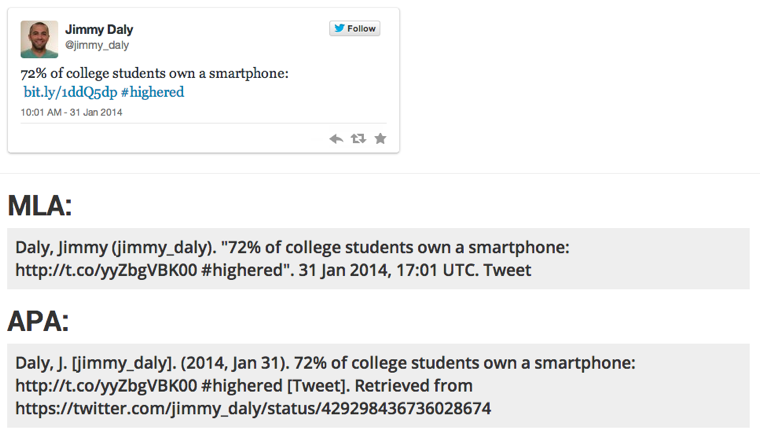 Professors: Have you seen tweets cited yet? Let us know in the Comments.