Pew Internet’s recent Social Media Update 2013 reveals some incredible findings about the growth of social media sites and their pervasive impact on our culture, particularly in college-age individuals. Here are a few highlights from the survey; be sure to download the full survey for more information. 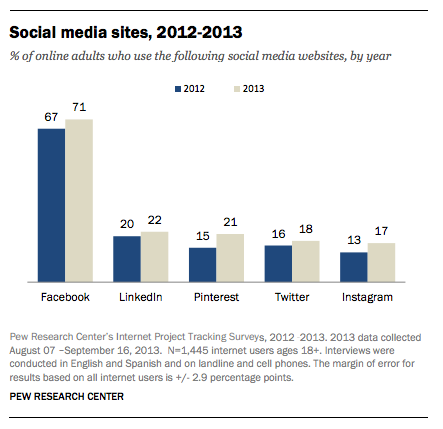 While many social platforms experienced growth in the past 12 months, Facebook strengthened its lead as the most prevalent network across all demographics. The site saw a 4 percent increase in the number of online adults who used the social network in the last year. Now, 71 percent use it, and 63 percent check the site daily. And an incredible 84 percent of college-age individuals, specifically those in the 18–29 age bracket, are users of the site.

Pew does point out that, although Facebook has been successful across a wide range of demographics, other networks are finding a comfortable home in certain age brackets and both gender groups. LinkedIn, for example, has become a popular site used by college students and recent graduates to network with peers and potential employers. 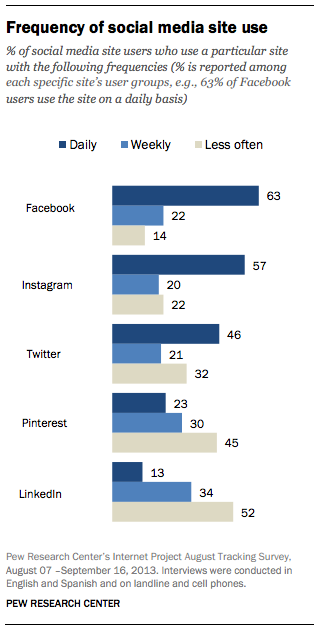 When it comes to pure engagement, however, no one touches Facebook and Instagram. FOMO, short for “fear of missing out,” affects millions of users each day. The more active your friends, the more likely you will check social networks each day. In each case, more than one-third of users check the sites more than once each day, according to Pew.

Instagram users visit the site nearly as frequently as Facebook users. More than half of Instagram users (57%) use the app on a daily basis, with 35% doing so several times per day. Twitter users are also frequent visitors to the site. Some 46% use Twitter daily, with 29% checking in several times per day. However, 32% of Twitter users say that they check in less than once per week.

Pinterest and LinkedIn users tend to have more intermittent patterns of usage. Just 23% of Pinterest users and 13% of LinkedIn users visit the sites daily, and around half say they use the sites less than once per week.

All of that engagement is great for social networks and their monetization plans, but FOMO has a real, often negative, effect on college students.

This article isn’t meant to study the actual content being posted on these sites, or the emotional issues they can trigger, but if you are interested in learning more about that, check out Martha Beck’s article Fighting FOMO: 3 Strategies To Beat Your Fear Of Missing Out.

The social media world that named FOMO has also made it an epidemic. It's hard not to develop this 21st-century form of anxiety when one glance at your smartphone reveals a thousand awesome things your friends -- and enemies -- are doing. I'll bet the thought of making energy-generating sculptures out of used diapers never even crossed your mind until your ex-boyfriend's new girlfriend posted a TED talk of herself doing just that, and FOMO slapped you right across your lazy, uncreative face. Thanks, Internet. Thanks a lot.

Now, you may argue that FOMO is healthy motivation. But the first of FOMO's four words -- fear -- is the opposite of healthy. Fear can get us moving, but never happily. Living with constant or recurring fear, from post-traumatic stress to paranoia to FOMO, doesn't improve life quality; it just makes us haunted and tense, and shrivels our internal organs until they resemble, in size and functionality, pork rinds.

For better or for worse, social media isn’t going anywhere. If you have tips on how colleges can leverage the social media explosion, let us know in the Comments.