With the emergence of cloud computing, mobility and Big Data as business objectives, CIOs no longer operate in a silo, but rather are an important part of every college’s day-to-day operations.

But as the infographic below illustrates, today’s CIOs are asked “to apply technology to increase productivity and time to market, while at the same time reducing costs” — which is the same role they played in the pre-cloud, pre-mobility era.

In a 1999 paper titled “The Evolving Role of the CIO,” authors Jeanne W. Ross and David F. Feeny of the MIT Sloan School of Management’s Center for Information Systems Research describe the role of the CIO as dependent on business objectives and the attitudes of senior leaders toward technology. Fourteen years later, their description still holds, despite the dramatic advancements in IT in the interim.

Clearly, dramatic technological changes have transformed computing from a backroom utility to a strategic organizational resource. This transformation has led to many changes in the use and management of information technology, including the reach and range of the technologies (Keen, 1991), the requisite skills and qualifications of the users of information technologies, the requisite skills and qualifications of IS professionals, the impacts — real and intended — of the technologies, and the amount of organizational spending on IT.

Changing technologies have also led to major changes in the responsibilities of the CIO. We would argue, however, that the effects of technology on the role of the CIO are not direct. Rather, the CIO's role has evolved through its interaction with three intermediate forces. Figure I [below] depicts these forces in a model that we shall use to examine the evolution over time of the role 1of the CIO. It suggests that changes in the role are related to wider changes in:

(1) Existing and planned applications of technology in the host organization;

(2) Attitudes of senior executives towards technology and its potential impacts and role; and

(3) Characteristics of the principal vendors who deliver and service the technologies. 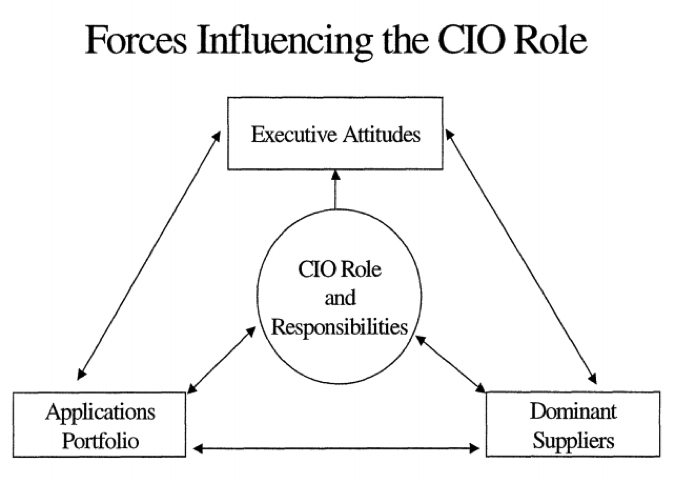 The infographic below examines the priorities and necessary skill set of the modern CIO.

This infographic originally appeared on Wikibon.