GREG JOHLL says the University of Wisconsin-Extension chose Nexus 7 ­tablets based on the device’s price as well as Google app integration.

With 72 counties and more than 54,000 square miles, the state of ­Wisconsin is a large coverage area for the ­University of Wisconsin-­­Extension (UWEX), which provides ­educational ­programs statewide.

UWEX's recent adoption of the Google Nexus 7 tablet is quickly closing the gap. Today, UWEX faculty and staff can connect to each other, and the communities they serve, instantly, with an array of ­collaborative ­applications. The tablets also have transformed their work in the field with farmers, families, schools, ­governments and ­communities.

"We're educators at heart," says Greg Johll, director of UWEX ­Cooperative Extension Technology Services. "The goal of the ­cooperative extension division is to help improve the lives of the people of ­Wisconsin, so it's ­getting the ­technology out there, where people live and work."

In March, UWEX distributed Google Nexus 7 tablets to 725 faculty and staff — about three-­quarters of its 1,000 ­employees.

The project started six months earlier, when UWEX Dean and Director Rick ­Klemme asked Johll for a solution that would help staff, who are located in all of the state's 72 counties, collaborate more effectively.

Johll wanted a device that would add value day to day: "I didn't want it to turn into a paperweight."

As he and colleague Tony ­Roman investigated possible ­solutions, they expanded their ­thinking beyond ­simply adopting a tablet, by creating a Mobile ­Collaboration ­Network and choosing Google Apps for Education as the foundation, with Nexus ­tablets as the device platform.

Nexus was selected based on price and Google app integration, Johll says, while also mentioning the fact that the operating system (currently ­Android 4.2.2) is always up to date. The base model has 16-­gigabyte ­capacity, but UWEX chose a 32GB model.

"We're trying to be very good stewards of our public dollars. We didn't want to just rush out and buy everybody $600 or $800 devices."

For Wi-Fi connectivity, UWEX distributed mobile hotspots, and some employees received wireless printers to enable printing from
anywhere in the field. At 12 ounces, with up to 10 hours of battery charge, the Nexus is well suited for fieldwork, while the ­camera and microphone allow remote colleagues to collaborate.

All Aboard the Tablet Train

Johll's first goal was to get the devices into employees' hands and help them become more comfortable with their use. The tablets then were integrated into UWEX educational programs.

Eventually, he says, "it will be second nature for somebody to pull out a tablet and say, 'We have a video that addresses this.' "

Early on, UWEX created an internal Google+ Community as a means for colleagues to ask questions and share ideas. The group now has roughly 500 members, about 40 of whom are very active.

Chad Cook, a natural resources educator in Winnebago County, says one of the best parts of the platform is the ability for users to share knowledge instantly. Instead of waiting for an annual conference, he says, in five minutes he can post a suggestion and a tutorial link to the community. Employees also are using Google Hangouts and Google Docs to ­collaborate, which has cut some travel expenses, Johll says.

"Because we're so spread out, you may have a team involving people from literally all over the state," says Cook, who has 11 counterparts throughout Wisconsin.

Tablet Rollouts Are an Opportunity for Other Upgrades

Putting everyone on the system also solved an important IT problem, Roman says: lack of standard ­infrastructure.

Previously, it was difficult to pull off services such as video ­conferencing ­because ­everyone used a ­different ­system.

"We asked, 'What technology can we centrally manage and distribute to level the playing field, location to location?' " Roman says.

While some UWEX employees embraced the technology ­eagerly, others initially were more comfort­able with their old, familiar ­notebooks. In those cases, Roman ­believes the tablet's 7-inch screen made it an easier sell. Once the final holdouts began using the Nexus for email and basic applications, they started to explore its other ­capabilities. Some of the best uses came from unexpected sources.

"People who traditionally are more resistant to change when it comes to adopting new technology are the ones asking some of the more informative questions," ­Roman says.

The ultimate mission, of course, is to educate clients, and the hope is that users will rethink how content should be ­delivered to reach audiences in the best ways.

"It's starting to be 'Let's do these short, under-five-minute videos because they're a lot more convenient to watch on a tablet or a phone,' " Roman says. That broad trend was a key driver of the Nexus adoption, Johll says.

Given the sharp increase in smartphone and tablet use, the team recognized "we needed to do something in order to be relevant to the people we're working with."

Tablets in the Farmer's Field 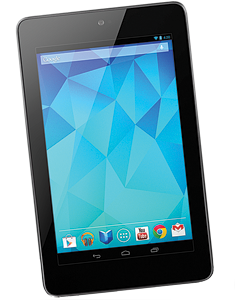 But that's not the only use for Google Nexus 7 in the field. In ­Wisconsin's dairy farms, which draw a large number of Hispanic workers, UWEX specialists can deliver translated fact sheets and materials on best practices.

"They can print them at the farm off the mobile printer, on ­demand," says Tony Roman, a UWEX IT team member.

The Wisconsin Nutrition Education Program is using the ­tablets to provide information about healthy food in multiple languages through real-time translation. "The tablet is acting as a bridge to people we normally wouldn't have contact with," Roman says.