One screen isn’t enough anymore. Fans are flocking to Twitter and other social networking sites while they watch basketball on television or in-person. With March Madness in full swing, our friends at BizTech put together this infographic about the technology being used in the stadiums hosting the Final Four. The infrastructure needed is incredible. For example, Lucas Oil Stadium, host to the Midwest Regional final, installed 630 wireless access points and can accommodate 28,000 devices simultaneously on their network. 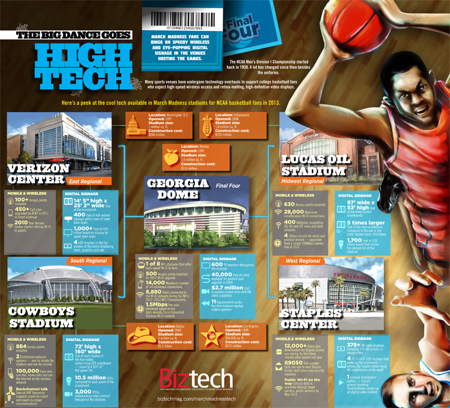 Read more about the technology powering the Big Dance here.

Carnegie Mellon Students Are Buying Lunch with Their Fingerprints

Security relies on three main authenticators: what you have, what you know and who you are. Carnegie Mellon University is slowly moving away from swipe cards, a longtime staple on college campuses, and toward fingerprint scanning:

Four seniors at Carnegie Mellon University who grew tired of scouring their backpacks to find their student-ID cards every time they wanted a bite to eat have found a new way to pay: their fingerprints.

“We carry around these little slabs of plastic,” says Kelly Lau-Kee. “You really shouldn’t have to carry anything on you that could be lost or stolen anymore. You should be able to pay or ID yourself just by being yourself.”

That’s the idea behind PayTango, which was created by Ms. Lau-Kee and three classmates, and is already in use at several locations on the Carnegie Mellon campus.

Read Carnegie Mellon U. Students Use Fingerprint Scans, Not ID Cards, for Payment on The Chronicle of Higher Education’s Wired Campus blog.

A Helicopter, Designed and Powered by College Students

You read that correctly. No motor and no gasoline — this helicopter is powered by ingenuity and the human body:

While it doesn't fly yet, Kenneth Huff and his fellow classmates at Middle Georgia State College have been conducting research and building prototypes of their helicopter since May 2011.

The group plans to enter the Sikorsky Competition, which awards $250,000 for the "first successful controlled flight of a human-powered helicopter."

Read more on Mashable, and check out their Kickstarter campaign.