Indiana University’s SUE B. WORKMAN says a phased approach is best when beginning a collaborative help desk model with another college. 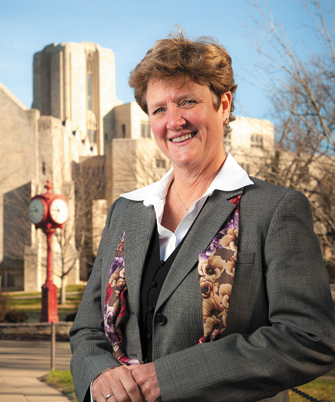 Soon after taking over as CIO at Ivy Tech in ­summer 2011, Anne Brinson realized the ­Indiana community college's help desk wasn't what it should be. A small operation that had trouble ­attracting and accommodating staff, its hours were as limited as its services. Her team looked into creating a fully robust, 24x7 help desk, but the cost was prohibitive.

Brinson sought advice from Sue B. Workman, associate vice president for client services and support at ­Indiana University, which is known for its top-notch IT support. But then the two women had an idea: Instead of attempting to replicate IU's model at Ivy Tech through outsourcing, why not piggyback on the IU service itself? After some discussions, the pair agreed to outsource Ivy Tech's help desk to IU and, in July 2012, they made it a reality.

"So far, so good," Brinson says. "Since they've taken over, my phone doesn't ring with help desk issues."

Students' calls are answered faster, she adds, and the improved help desk services cost far less than if Ivy Tech had upgraded in-house.

"There's a lot of pride sometimes in having your own thing and being the best at it, but there's also a lot of cost," Brinson says. "Duplication is wasteful."

The "partnersource" project, as the schools refer to it, wasn't without precedent. A year earlier, Ivy Tech had started leasing space in IU's new data center. "I would not have been thinking along the IU path if it hadn't been for the data center," Brinson says. The earlier project was so successful, she says, that it was difficult to ignore an opportunity to partner with IU again.

Ivy Tech could have outsourced its help desk to a ­vendor, but beyond the data center collaboration, the schools also already partner in educating students (many Ivy Tech students matriculate to IU to earn their bache­lor's degrees). Both Ivy Tech and IU also receive state funding and are nonprofit institutions, so there were many reasons it made sense to share administrative loads.

"Should we partner?" is a question IT departments at colleges around the country are asking, especially as budg­ets shrink and technology and education demands rise. "I think that universities are going to have to leverage off of each other and play to their strengths," Workman says. "We don't have to duplicate all these things."

Nicole Lyon, the support center frontline lead at Indiana University–Purdue University at Indianapolis, and two others spent nearly a month at Ivy Tech learning about its systems, watching the staff respond to email and listening to calls. "There was a lot to learn in a fairly short time," Lyon says.

But, she adds, there were enough similarities between the operations to make their jobs easier. For instance, while the two have different learning management systems, they use many of the same features, such as sharing syllabi and administering tests. "There weren't too many differences," Lyon says. "Mainly just a different look and feel."

Some startup costs were involved, such as extra licenses and additional furniture to accommodate more staff. But, Workman says, the greater challenge was learning the political culture, processes and personalities of another campus. "We have quite different audiences," Workman says. "Ivy Tech has a lot of adjunct faculty and more part-time students than we have. We have residential campuses; they don't."

Number of end users supported by Indiana University's help desk since it began serving Ivy Tech Community College, up from 160,000 prior to the partnership

But everyone involved says the colleges met the challenges smoothly, thanks to a phased approach. IU started handling Ivy Tech's help desk on nights and weekends in July, and it moved to a 24x7 operation in October. Another big help was IU's knowledge-base system, which help desk staff use to look up answers to questions. IU developed its own knowledge base 20 years ago and is using this tool to serve Ivy Tech. IU hopes to be able to add self-service via a knowledge base to the agreement, given that an estimated 60 percent of the content — such as how to connect to a virtual private network — is the same for both schools. "There's no reason that we have to all spend money re-creating the same thing over and over and over," ­Workman says.

The same could be said of other colleges, and both Workman and Brinson have discussed forming similar partnerships with other institutions.

Because the IU team documented everything, like costs, metrics, ­processes, requirements for both schools, it now has a toolkit of serv­ices that can be shared to expedite the partnering process. "I think we could ­replicate this again," Workman says. "It's a good way to leverage resources."

5 tips for colleges who are ready to collaborate on IT services.

Upon opening doors 10 years ago in Needham, Mass., it was difficult for Franklin W. Olin College of Engineering to miss the potential for partnerships. Olin purchased 75 acres from Babson College, which now sits in its backyard, two miles from Wellesley College. The idea behind Olin was simple: Put all of its energy into offering the best possible engineering education, not on re-creating services and systems already plentiful at Boston's many colleges. The school looked to ­Babson, known internationally for its entrepreneurial program, and Wellesley, one of the top liberal arts colleges in the country, says Joanne Kossuth, vice ­president of operations and CIO at Olin.

Students can cross-register for courses and eat in one another's dining halls. Olin has a direct fiber connection to Babson and a joint Internet connectivity contract for one provider, which allows for opportunities to segregate network traffic and use each other's campuses as data storage backups. Faculty teach joint courses, and Olin shares a public-safety department with Babson, which means Babson Public Safety has access to Olin's security systems, such as surveillance cameras and door locks. They also share the library cataloging function with Wellesley ­College and are exploring license sharing for library assets.

But a lot of the value from the partnership comes from unofficial information sharing, Kossuth says. The colleges have meet-and-greet receptions several times a year so employees can talk to and become resources for their counterparts on the other campuses. "We sort of barter technical skills," she says.

They're also discussing the creation of an emerging technologies team. None could afford a full-time employee to explore emerging technologies, but they each might be able to contribute part-time people to work together. "The three together are bigger than any one separately," Kossuth says. There are more cultural events, presentations and opportunities to collaborate, she says, and students also are exposed to potential ­business partners from all three campuses, while learning to work with different kinds of people — all critical workplace skills.