Open-source software has long been an alternative to expensive software. The web has enabled communities to easily unite over a common goal, whether it’s the web browser Mozilla Firefox, the Linux operating system Ubuntu or the collaborative encyclopedia Wikipedia. Smart developers understand that their collective power is greater than most software companies, and the developers’ work can be just the disruption the industry needs.

How does an open-source revolution begin? Generally, it starts with a product that is expensive or inadequate, which upsets enough people to a degree that makes them willing to put in many hours of work for nothing in return. This is constantly happening with software, and now it’s happening with college textbooks.

The cost of textbooks has risen steeply over the last 20 years, and according to the infographic below, college students are spending more than $1,100 per year on textbooks. Even more worrisome, between 40 and 70 percent of college students have done without a textbook because it was too expensive.

If students are expected to use textbooks in class, universities and their professors have a responsibility to make sure the books are affordable. E-books and other digital learning content are a likely part of the solution, but a new open-source textbook movement is gaining momentum and holds enormous promise.

Textbooks are just one small part of the discussion about the cost of college, but they are also low-hanging fruit:

“There’s a crisis of access in this country,” says Richard Baraniuk, a computer and electrical engineering professor at Rice University. He’s talking about the rapidly increasing cost of college education, which includes not only tuition, but also room and board, class fees and, yes, textbooks. Estimates of how much students spend on textbooks in a given year vary widely, but most colleges’ financial aid websites peg the cost at about $1,000.

Baraniuk thinks that cost should be reduced to zero. He’s been part of the open-source educational movement since 1999, when he grew frustrated with the book he was using in his electrical engineering class. He considered writing a book himself but had an epiphany as he learned more about the open-source operating system Linux. “I realized that we could take the same ideas–namely, modularity…and open-sourcedness, making it free and remixable–and apply that not just to software but to textbooks.”

Unlike with traditional textbooks, however, professors have the ability to remove chapters and insert new materials as they please. Those educators that have jumped into the open-source waters say there are great benefits for the students and for themselves.

Check out the infographic below to learn more about open textbooks and where to find them. If you’ve already used them in your classroom, let us know in the Comments section. 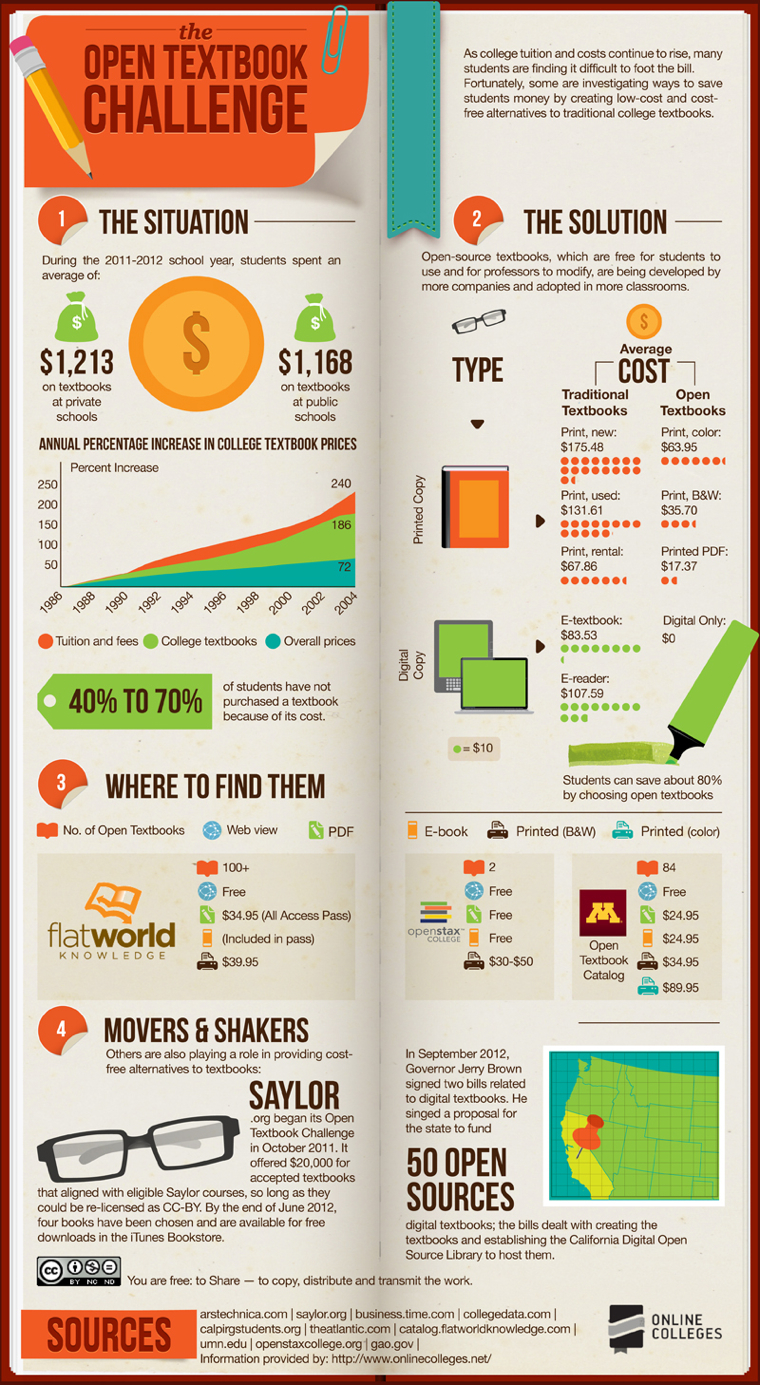