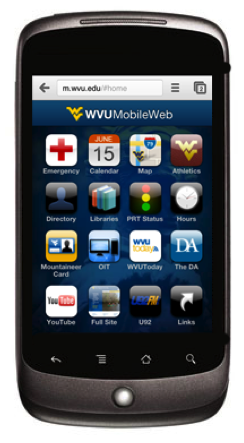 Before delving into “how” West Virginia University (WVU) created such a useful mobile presence, it’s worth asking “why.” You don’t have to look far to understand why this was an important initiative for WVU. Here are a few statistics about Americans ages 18–29 and their mobile devices:

But that is just the beginning. College students are using their smartphones to get directions to buildings on campus, check-in at cafes, share photos of their college experience, connect with friends and professors, check the weather and read the news. Each of these is tied tightly to the daily life of a student. Questions such as “What should I wear to class?” and “Where is the registrar’s office?” are easily answered. Forward-thinking schools that provide easy access to campus information are going to engage with students on a micro level.

Implementing a robust mobile experience for an entire university is easier said than done. Or is it? West Virginia tapped programmer and project manager Dave Olsen for the job, and he delivered in a big way. He was able to launch a mobile website for WVU in just 19 days. He took advantage of MIT’s Mobile Web to create the Mobile Web Open Source Project, which he describes as a “product designed to make it easier for higher education institutions to deliver mobile-optimized information and services. It helps deliver task-based content like maps, events, and directory information optimized for device ‘families.’”

Since then, he has started a blog to document his experiences creating mobile solutions for WVU and to provide resources for others schools. He shares webinars, case studies and even the code he used to create the first iteration of the school’s mobile site. Around the same time that the mobile site launched, Jared Crawford — an undergraduate student — created an iOS app for WVU called iWVU. Crawford also released the code as open source, which meant that other schools could leverage the framework to create similar apps.

To say that the launch was a success would be a huge understatement. Within just one year, the mobile site was getting 5,000 visits each day. The app sports a 4-star rating, with almost 300 users offering feedback. The WVU mobile suite now includes more mobile sites and Google Play, the app store equivalent for Android devices, and offers several WVU apps, and tablet versions for each have also been created.

To learn more about Olsen’s work, check out his blog and his Mobile Open Source Project resources.