Wireless is simply expected. In fact, when students arrive on college campuses today, reliable Wi-Fi is as much a requirement for them as engaging lectures, affordable fast food and a sports team worth painting their faces for.

"They don't want to be tethered," says Param Bedi, Bucknell University's vice president of library and information technology. "More than three-quarters of students — maybe closer to 90 percent — don't even know what an Ethernet cable looks like, as they've grown up in a wireless world."

Delivering mobility has become a top priority for college IT departments. In some ways, colleges are ahead of the corporate world in that students have brought their personal notebooks to campus since the first Wi-Fi networks rolled out more than a decade ago. Now, colleges face an explosion of bandwidth-hungry mobile devices as instructors and staff also bring their smartphones and tablets to campus.

Students use Wi-Fi to access the web, connect to educational materials on learning management systems, register for classes and check grades, says Frank Ganis, a principal of the Gilfus Educational Group, an independent consulting firm. And, as more faculty incorporate technology and mobile devices into their teaching, the importance of wireless networks will grow further.

College IT departments are meeting the challenge by overhauling their existing wireless networks with the latest 802.11n technology. It's an opportunity for IT administrators to rearchitect their networks by placing more access points across campus. And in doing so, they're revisiting how they handle security and discovering new efficiencies for managing and supporting the Wi-Fi network.

About two years ago, Cleveland State Community College in Tennessee invested $80,000 to build a new 802.11n wireless network. The college realized its old 802.11b network had become a money drain, a management nightmare and insufficient for the institution's future needs, says Andy Semak, Cleveland State's manager of network and support services.

Semak says the cost of yearly maintenance from the manufacturer was becoming more expensive each year. Management wasn't easy, either. The IT department needed Media Access Control (MAC) addresses for each student device to meet state access requirements. But because most students didn't know their MAC addresses, the IT help desk had to manually register each student, a process that created long help desk lines for several weeks at the beginning of each semester.

And while the old network's 11 megabits-per-second bandwidth met campus needs at the time, the IT department also knew they faced a burgeoning demand for wireless access in the future. All things considered, it was time for an upgrade.

"It was dated, maintenance was very expensive, and manually creating user accounts was time-consuming," Semak says. "We just needed to replace it with a newer, better system."

After considering several manufacturers, Cleveland State's IT team standardized on Aruba Networks because of its reputation for good customer support and because its technology required minimal IT management and maintenance. With Aruba's Wi-Fi equipment, Semak and his team can use a wireless LAN controller to centrally configure and manage new access points.

The new network is more reliable and much faster, providing speeds of up to 300Mbps. "We've been running on Aruba for a year, and it's so much easier to manage," Semak says. "Once the controller and APs are set up, I am done. Occasionally, there is a software update, and I just download it onto the controller, and that's it."

With Aruba software, students can automatically register for wireless access. Through a captive portal page, students must agree to the terms of use, after which they are authenticated and gain Wi-Fi access. The portal automatically grabs their MAC addresses. "Now they can self-register, and they love it," Semak says. "We don't have students lining up anymore."

Last summer, Johnson County Community College, which serves 21,000 students in Overland Park, Kan., installed an 802.11n network as part of a larger technology upgrade to improve communications and the stability of the college's data center and network.

"We had unpredictable performance with our data centers and network that created just enough of a ripple effect to give a lack of confidence in the infrastructure," says Sandra Warner, the college's deputy CIO and director of administrative computing services.

Last summer, after rearchitecting its data centers and network to improve reliability and performance, the IT department set its sights on upgrading the wireless network and spent three months installing 300 new Cisco 802.11n access points. As part of the project, they upgraded switches in buildings to support Power over ­Ethernet. That let the IT staff power the access points and VoIP phones over an Ethernet connection, which saved the college the cost of installing new electrical outlets every­where, says Martin Huerter, JCCC's network architect.

Cisco's wireless LAN controller and wireless control system allows the IT department to centrally manage the access points. It also lets the IT staff see maps and drill down to building floors to see the access points, their coverage areas and how many people are connected.

"It helps us identify rogue access points, and when someone calls and says 'we're getting a bad wireless signal,' we can adjust the network and maybe pump up the coverage area of one access point down the hall to improve performance," Huerter says.

The Cisco equipment can also automatically adjust configurations to maintain optimal performance. If one floor has three access points, and one dies, the other two will power up and try to cover the entire area. "It's very dynamic and intelligent," he says.

Besides ease of management, one important benefit of 802.11n is that the new access points can support many more users and devices, says Andrew Heiser, executive director of information services at Morningside College,
a 1,300-student private college in Sioux City, Iowa.

"The main benefit is that students can have multiple connections. Our classrooms can now handle more connections than there are people in the room," Heiser says. 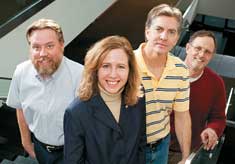 The upgrade to 802.11n at Johnson County Community College in Kansas was part of a project to improve the overall stability of the data center and network, say Matt Holmes, Sandra Warner, Kevin Steuber and Martin Huerter.

It took Cleveland State's IT department just one week to install the new wireless controller and new access points. During installation, the IT staff used existing wiring and swapped out old APs for new APs. But because the Aruba AP-105 and Aruba AP-120 access points offer wireless coverage over greater distances, the college cut the number of APs from 114 to 83 and still was able to provide full coverage across campus, Semak says.

However, Eric Smith, assistant director of networking and information security at Bucknell University, warns that it can take a lot of time to plan and install a Wi-Fi network, from performing a site survey to installing the wiring for the access points.

"People don't realize the hardest piece to install is the wiring to plug in access points," Smith says. "A campus like ours has 150-year-old buildings. They were not designed to pull Ethernet cables from one side of a building to another. You burn up a lot of time and expense to get cables from A to B."

Many colleges also segregate students, faculty and staff onto separate portions of the network. For example, at Cleveland State, Semak splits students and employees on separate Virtual Local Area Networks.

Students log in to an open network where they can access the Internet and retrieve e-mail. Faculty and staff access a more secure network with 802.1X encryption. They sign in using their user name and password, are authenticated through the Lightweight Directory ­Access Protocol, and access administrative applications and other work documents. The wireless controller performs the authentication process — students via the captive portal, and faculty and staff through the login, Semak says.

At Bucknell, users are authenticated through a Network Access Control device that checks users' computers to make sure their Windows and Mac operating systems are up to date. It also checks Windows computers for the latest antivirus software. If they are not current, they are redirected for updates before they can connect, Smith says. Other devices, such as mobile phones, are not checked at this time, he adds.

Overall, college IT managers say their new Wi-Fi networks are meeting expectations. Since completing its new system in October, JCCC has seen a 30 percent increase in the number of devices connecting to its wireless network. The new Wi-Fi network gives students, faculty and staff the mobility they have craved for years, Warner says.

Here are five tips for building a more robust wireless network on your campus.

Tip 3: Fine-tune the Wi-Fi network over time. Don't get hung up on a precise RF analysis and perfecting the placement of access points, says Martin Huerter of JCCC. "Do the best you can with the analysis information you have. There is always going to be a need to tweak the signal and placements of access points to eliminate dead spots."

Tip 5: 802.11ac is coming. The next Wi-Fi standard, 802.11ac, will feature gigabit speeds. The Wi-Fi Alliance is expected to finalize the standard by December 2012, with prestandard products coming out during the third quarter of the year. Wait until the new standard is ratified before purchasing the new equipment. Otherwise, you run the risk of compatibility problems later, says In-Stat analyst Greg Potter.