Washington University's School of Medicine has extra eyes watching over its research labs.

E. Scott Rich, director of information systems for the St. Louis-based school, has installed two Internet Protocol (IP)-based cameras as part of a larger security solution to watch over freezers full of frozen specimens. Researchers have spent a lifetime cultivating these research materials as they seek to learn more, and ultimately, find a cure for childhood diseases.

Because freezers can malfunction, Rich installed temperature sensors on the units. If the temperature rises, which can jeopardize the research material, facilities workers are immediately paged. With their notebook computers, workers can log on to the Web, and through a virtual private network, they can view the video. If it's after hours, they don't have to rush to campus to see if there are any visible problems, such as someone tampering with the freezers or a researcher leaving a freezer door open by accident.

“They can look at the freezers via the Internet and immediately review their condition,” Rich says. The warning sensors give the researchers and staffers time to save the frozen research material.

Video surveillance security systems have been around for decades, but the way the image is captured and stored has undergone major changes in recent years. Digital video recorders (DVRs) record the images to a computer hard drive that can be linked to a campus network. IP-based digital video cameras are more cost-effective, more user friendly and offer more features than older systems.

In the past, the only option was closed-circuit television (CCTV) systems, which required security staffers to view the analog cameras live in a room full of monitors. With this technology, universities had to wire their buildings with coaxial cables at a significant cost. When VCRs were invented, the video was recorded onto tapes, which had to be swapped out every few hours. If an incident occurred, it took the police hours to wade through the footage to find what they needed.

Now, many colleges are choosing IP-based cameras that connect directly to a local area network or a wireless network. The video is saved on digital video recorders or directly onto servers. If a crime takes place, campus police can search the archived video by keying in the estimated time and location of the incident, and the footage pops up on screen.

Like Washington University, many colleges have incorporated IP-based cameras as part of a larger security system that incorporates door alarms and motion sensors, says Adam Thermos, a security consultant and founder of Strategic Technology Group, in Milford, Mass. He says that in some installations, if a door alarm is triggered, the campus police are automatically notified on their computers with a picture or live video of the door.

Some digital video camera systems have built-in intelligence and software-based behavior analytics that alert officers of suspicious activity. For example, campus police can program the security system to watch out for car thefts. If a person lurks in a parking lot for a long time and moves from car to car, the camera will recognize the behavior and automatically notify campus police, Thermos says.

A new digital surveillance system to cover an entire campus of 25 to 30 buildings – with four to five cameras in each building and DVR technology – can cost in the neighborhood of $125,000. “The return on investment is tremendous,” says Thermos, who is the designer and systems specifier for more than 50 universities' on-campus security. He says that some crimes are solved in minutes with the help of this technology. “It has saved universities millions of dollars in litigation, from sexual crimes to assaults to vandalism, as well as intellectual property and computer middleware theft,” he adds.

While the main purpose of IP-based video cameras is to help police investigate theft, vandalism, assaults and drug offenses, there's a marketing use for the cameras as well, Thermos adds. Some schools place cameras on rooftops to give an overview of campus life. That allows prospective students to check out the campus online and enables current students and staff to view new buildings under construction.

Seven years ago, the University of Alabama had a smorgasbord of surveillance camera systems. Different schools at the Tuscaloosa, Ala., campus had purchased and installed their own analog video cameras that recorded on time-lapse VCRs from different vendors.

Each time incidents occurred and the campus police brought the tapes back to the station to view, they discovered the picture was never clear and wondered why. Michael Cobb, chief security systems technician for the University of Alabama's police department and a new hire at the time, explained that they had to be viewed on the same time-lapse VCR that recorded the original video.

“I told them what they had was old, decrepit and out of date,” he recalls.

Now, the school uses a hybrid of old and new video surveillance technology. Cobb has installed hundreds of analog CCTV cameras connected through coaxial cables, but deploys DVRs to record the video. Campus police can view the video via the campus network.

Over the years, the business, education and engineering schools, and the Paul W. Bryant Museum, which houses the school's sports memorabilia, have asked Cobb to install security systems that included digitally recorded CCTV cameras with door-access control and intrusion alarms. The university plans to blanket the rest of the campus, including open spaces and parking lots, in the near future. It recently received funding to install an integrated security management system that integrates intrusion alarms, CCTV and card access into one system, he says.

This spring, Washington University's Rich is installing 10 IP-based video cameras to watch over the school's research and computer labs. The cameras will record video onto the school's storage area network. If an incident occurs, school officials, facilities personnel and campus police can quickly investigate by reviewing the video to determine what happened and identify the culprits.

“Every facility that contains sensitive information needs to have some type of video capture capability to ensure the security of their data, property and equipment,” Rich says. The university originally invested about $25,000 for the technology, and it's been worth it because the system has prevented the loss of frozen research material, Rich says. “The initial investment has paid for itself multiple times,” he adds.

Here are some tips on installing and using digital surveillance cameras:

1. Double-check camera angles. Make sure you can see the faces of people walking in and out of rooms and buildings.

2. Protect privacy. While cameras can be placed outside dorm entrances, cameras cannot be placed inside dorms, such as hallways. No cameras are allowed inside locker rooms or restrooms, either.

3. Increase the visibility of cameras. Use public signs that warn people that cameras are recording. This could modify people's behavior and stop them from attempting to commit a crime.

4. Store at least two weeks of video footage. A 30-day record is optimal. If an issue doesn't arise within 30 days, it's generally safe to record over the video.

6. At the campus police station, use two flat-panel screens to view the video cameras. Use one screen to rotate live video feeds from different parts of the campus. Save the other screen for emergencies. For example, if an alarm goes off, program the second screen to show the video from the location of that alarm.

Wylie Wong is a technology writer in Phoenix. 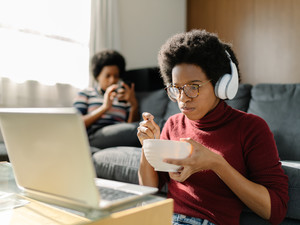