When Joel Klein says, “There is nothing more resistant to change than the public school system,” the man speaks from experience.

As former head of the New York City public schools and current CEO of Amplify, the multimillion-dollar education technology venture funded by Rupert Murdoch’s News Corp., Klein has seen the struggles — and, likewise, the promise — of America’s public schools from more angles than most.

In a wide-ranging interview with Wall Street Journal contributing writer Alan Murray, which you can watch in its entirety below, Klein points to a common misconception about the use of technology in education.

“If people think this is about somehow putting a computer or putting a tablet, or putting a smartphone in a kid’s hand, they are wrong,” says the former schools chief turned CEO. “This is not a labor-saving gig,” he says. “It’s about empowerment and becoming more effective.”

Klein offers five “key reasons” why the nation’s K–12 system, which has struggled to prepare students for college and career success — by some accounts, fewer than one in five high school students is college-ready — is poised to take the next step toward full-scale technology integration.

Klein says the Common Core, an emerging educational standard that aligns learning goals and benchmarks across state lines to better prepare students for the future, will allow technology providers and educators to develop content that can be rolled out on a national basis, a move he believes will provide more opportunities for feedback and, in turn, classroom innovation.

Rather than rely on a traditional educational model rooted exclusively in the economics of “human capital” — smaller class sizes and higher pay for teachers, for example — Klein says innovations now make it possible to invest in and introduce technologies and other resources built to aid and inform the learning process — tablets that bring instruction to students, wherever they are, or analytics that help educators make more informed choices about how to serve individual students.

Klein says blended instructional models, which traditionally include some combination of teacher-led instruction and technology-based tools, often to support the inclusion of individual drill-and-practice for students, have become more prevalent in K–12 schools and are, for the first time, “beginning to be received.”

The youngest educators, many of whom grew up on technology, are increasingly comfortable using it with students in their classrooms, Klein points out. In many cases, these next-generation teachers do more than simply support the use of technology in schools — the most outspoken among them demand it.

Finally, Klein says, investor interest in the potential of educational technologies is surging, as evidenced by News Corp.’s recent commitment to Amplify, the educational analytics company that pays his salary. This is confirmed by a recent report from the Software & Information Industry Association, which says schools spend nearly $8 billion a year on educational software and other digital products. “Capital flow usually is not unintelligent,” says Klein, who adds, “We’re beginning to see significant capital flow into this space, all of which makes me very excited.”

I’ll leave you with the same question Murray posed to Klein: “Are we moving toward a system incented to adopt positive change?” Tell us in the Comments.

(Viewing tip: If you know who Joel Klein is — and I’m betting many of you do — do yourself a favor and skip to the first question], which comes at about the 2:20 mark.) 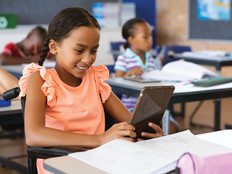 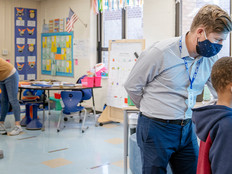