No college supports piracy, but that’s not the reason more than a third of U.S. universities had banned the peer-to-peer sharing service by 2000. A Gartner study, “Colleges and Universities Prepare for Napster's Sophomore Year,” reported that copyright litigation was scaring off some colleges but also noted that Napster was eating up bandwidth in dorm rooms and costing a fortune. At Indiana University, the “computer department reported that Napster use was consuming 61% of its bandwidth before they blocked access to the site.” 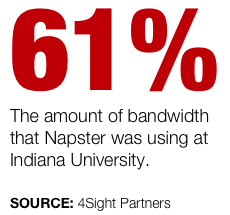 In the late 1990s, dial-up modems were the norm, and college students were treated to Internet speeds that were 30 to 50 times faster in dorms, according to an article in Georgia State University’s student newspaper, The Signal. In 2001, Georgia State capped its bandwidth to discourage excessive peer-to-peer sharing with applications like KaZaa and Gnutella:

At off-peak times, when the system is running the fastest, the average download speed is between 100 to 200 kilobytes per second-approaching DSL and cable modem speed, said Brad Andrews, a technical manager at Residential Computing.

But during peak usage times, from 5 p.m. to midnight, Residential Computing has been seeing 20 kilobytes per second, according to tests, Andrews said.

Read Bandwidth capped for UC-Berkeley dorm residents on The Signal.

Other colleges, such as George Washington University, banned peer-to-peer sharing altogether to avoid becoming the target of litigation, preserve precious network bandwidth and keep students focused on their studies:

Legal threats are just one reason that universities are restricting access to the service, says Roger Schechter, a professor of copyright and trademark law at George Washington University.

"What (universities) are discovering is that their systems are being overloaded by students who sit in the dormitories all night and download music, and that academic projects can't get accomplished," he said.

Read Napster use is clogging university networks on BBC News.

Napster was shut down in 2001 after a series of lawsuits, but it was years before peer-to-peer sharing was replaced by legal music downloads and streaming. Luckily, we aren’t facing this issue in higher education right now, but mobile devices are having a similar impact on bandwidth.

What is the next technology crisis that colleges will face? Let us know in the Comments section.