With national debates swirling about how long school days should be and whether school years should extend further into the summer, it’s important to consider the role that quality afterschool programming can play in improving students’ lives.

The Boys & Girls Clubs of America, which was founded in 1860, has been hard at work providing students, particularly those who come from families with lower incomes, with experiences, activities and education that helps them to succeed in the long run.

The value of an afterschool program lies in its ability to “improve classroom behavior, school attendance, academic aspirations, and reduce the likelihood that a student will drop out,” according to survey data analyzed by Youth.gov.

But securing resources to bolster and modernize operations for nonprofits like the Boys & Girls Clubs can sometimes fall to the backburner, which is particularly true when it comes to the technology side of operations.

“Yes, we struggle when it comes to upgrading our technology. It’s an under-resourced part of our organization,” says Calvin Lyons, president and CEO of Boys & Girls Clubs of Metro Los Angeles. “And I sometimes noticed a double standard of sorts where nonprofits are expected to do very high level work, change lives by fulfilling their missions, and ensuring that other organizations have the best prepared future leaders but we are not always rewarded for making these critical investments. That’s why it helps to have benefactors pitch in and bridge the gap.”

Giving the Gift of Tech 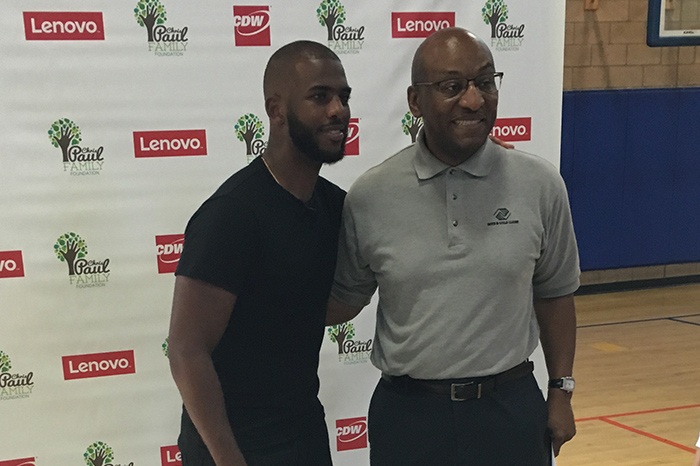 Los Angeles Clippers point guard Chris Paul has been in the Los Angeles area since he joined the team in 2011. And since he’s arrived, he’s established a relationship with the Boys & Girls Clubs of Metro Los Angeles, Watts/Willowbrook site, through his nonprofit organization, the Chris Paul Family Foundation. The foundation previously donated a games lounge to the club, but on August 15, Paul teamed up with CDW, Lenovo and GOLFZON to give a significant tech bundle, which includes a set of Lenovo notebook computers, tablets and a cutting-edge golf simulator.

“The technology lab, where they’re going to be able to work with some of their educational programs and after-school programs, that helps stimulate the kids with technology,” says Ben Weiss, director of nonprofit sector at CDW. “We’ve done a lot of work with Lenovo. When we approached them with the opportunity to support such a great organization, they jumped in headfirst.”

The notebook computers and tablets are a way for the club to chip away at the Digital Divide — the disparity in access to broadband internet and technology between students from low-income and higher-income areas.

“We are on the front lines against the Digital Divide. Our Boys and Girls Clubs of America programming team is providing the answers. They’re developing and adopting cutting edge programming that we can now take and implement at the club level,” says Lyons. “We also understand that most youth access technology primarily with their cellphone, so we are incorporating learning methods that keep them connected to us and the best programming.”

This notion of equality and access is what drove Paul to make his donation a technology-focused one.

“With everything being so technology based, kids on one side of town shouldn’t have the opportunity to these benefits just because they grew up here and kids on the other side of town don’t,” he says. 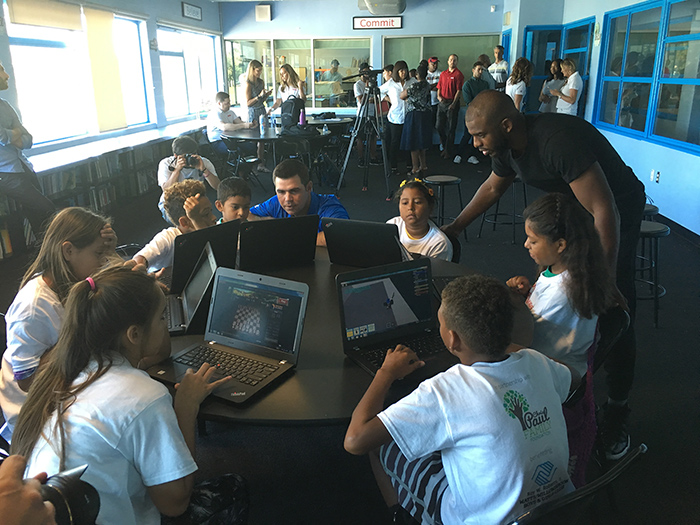 Additionally, like most educators, Lyons and the Boys & Girls Clubs of Metro Los Angeles are keenly aware of the need to provide students with more STEM-education and technology. The notebooks and tablets will offer a great assistance toward achieving those goals.

“We understand that STEM based education prepares them for great futures. We also recognize that we need to partner with school districts and others, to ensure that out-of-school time has that continuation of STEM learning,” he says. 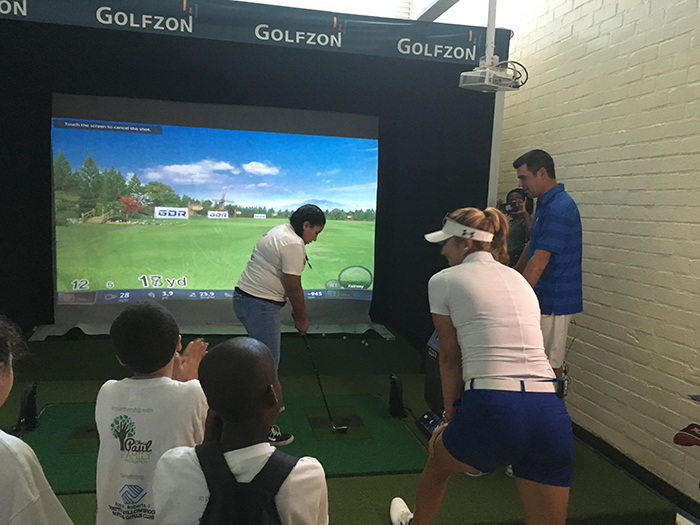 Gary Woodland (far right) and Alison Lee (center) gave kids a hands-on lesson on how to use the new golf simulator.

Baseball, basketball and football are entrenched parts of most sports programs for kids. But golf is often overlooked. Some of this is due to the cost of purchasing equipment and the fees associated with visiting a course. But a major part of it is also due to a lack of exposure.

Paul, who has played basketball with his father and brother since he was a boy, only got into golf in 2009. His brother started playing the game and he got sucked into it; their father soon joined in on the fun. While playing in the NBA is Paul’s main focus, golf offers him a new way to channel and test his athletic abilities.

“I was never introduced to golf. Nobody ever came to me and said this is a cool sport, this is something you should try to figure out to learn. So these kids, they’re getting an early start on this,” he says.

The simulator, which includes video technology that records the students’ swings, makes it easier for kids to get a feel for the game and makes it fun and accessible.

“Golf is a game that everybody can play and that’s what’s so fun about it. You have Chris Paul, one of the greatest basketball players in the world, it’s a challenge for him,” says PGA Tour player Gary Woodland, who was on hand to train kids with the golf simulator along with LPGA Tour player Alison Lee. “Anybody really with hand-eye coordination can come out there and be successful at it. I can’t go dunk a basketball but he can come out there and make a three-foot putt.”

While the physical activity brings several advantages to the table, Lyons points to the fact that it could provide kids from underserved backgrounds with yet another path for scholarships and preparation for the realities of professional life.

“Not only is golf fantastic for learning self-regulation and discipline, but it can greatly expand your network. It creates opportunities to conduct business and to meet new people. And I’d love to have our kids have as many opportunities for success as possible, ,” he says. “I’m also observing the number of scholarships kids can obtain when universities are excited about diversity and inclusion, and our youth bring this added skill set, to the competitive college level and beyond.”